A new take on an old Slavic tale

THE WASHINGTON POST – Steeped in the ancient tropes of folk tales and animated by a passionate belief in the vital role of storytelling, GennaRose Nethercott’s first novel builds on her work as a folklorist and poet.

Thistlefoot updates the classic Slavic tale of Baba Yaga, a ferocious old woman who lives deep in the forest in a house standing on chicken legs. In Nethercott’s version, the building has been bequeathed to contemporary American siblings Bellatine and Isaac Yaga by their great-great-grandmother.

It’s been hidden in Ukraine for 70 years and is now en route to Brooklyn.

Bellatine and Isaac know nothing of this Russian forbear, having distanced themselves from their roots.

Isaac dropped out of high school and hit the road to “build a life from scratch, with only his wits and his own body to rely on”.

He’s become an itinerant street performer who rivets and perturbs spectators with his uncanny ability to reproduce the physical appearance of anyone in his audience. 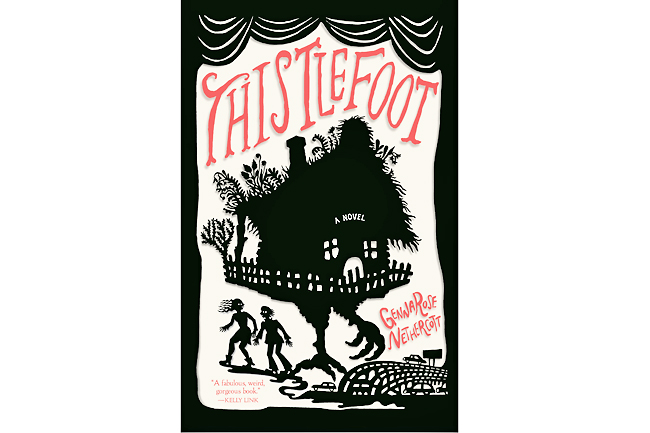 When that stunt doesn’t prompt sufficient donations, he lifts wallets as he exits.

Bellatine has an even more uncanny gift: the ability to bring inanimate objects to life with the touch of her hands.

She discovered this at her parents’ puppet theatre and fled the family business after the gruesome resurrection of a dead deer made her vow to suppress her supernatural ability.

Now apprenticed to a cabinetmaker, she touches wood only to craft it into useful items.

“Objects as objects. Nothing more.”

She wants to live in “a functional, dependable world with dependable laws”.

Yet when the siblings meet for the first time in six years to pick up their bequest, Bellatine finds this bizarre cottage on legs oddly comforting and inexplicably familiar.

“I really want this house,” she tells Isaac.

What he wants is money, and he strongarms Bellatine into agreeing to convert the house into a puppet theatre and tour their family’s signature show, The Drowning Fool: “At the end of the tour, I get all the cash. You get the house.”

His sister reluctantly agrees, provided that only Isaac handles the puppets, and they trot the house (which obeys commands in Yiddish) out of the Red Hook Marine Terminal and onto the road.

Bellatine names their new possession Thistlefoot, remembering her mother’s comment that “people in our family, we’re born with thistles in our feet. It’s why we’re always travelling”.

As the freewheeling con man and his fearful, buttoned-down sister travel, their magical home speaks to us, tracing the Yaga family’s history back to a shtetl in Russian Ukraine.

But don’t expect straight facts from Thistlefoot. “I’ll recite it like a folktale,” the house explains.

A folktale “is fluid and changing, able to adapt to whatever setting it finds itself in… the folktale survives. Assimilates. And with it – so survives the memory”.

Thistlefoot’s memories unfold in tandem with the siblings’ journey across the country, pursued by a sinister figure called the Longshadow Man.

He is after the house, and to capture it he creates an army of “smokefed” humans who have become hosts to specters that spur them to violence.

Isaac and Bellatine learn all this from three people who have been tracking the Longshadow Man for several months (for reasons that are never very clear).

The trio wants to use Thistlefoot as bait to lure him into a confrontation and – they hope – destroy him.

There’s a lot of dense plotting to absorb while Thistlefoot fills us in about Baba Yaga and the grim fate of the shtetl’s inhabitants, in counterpoint with Isaac and Bellatine struggling through their own painful memories.

The text is stuffed, perhaps overstuffed, with Nethercott’s thoughts on everything from class prejudice to the nature of identity and the mixed blessing of belonging to
a community. Through it all, her central concern is how we preserve and understand the past through the stories we tell.

The eventual, somewhat schematic explanations of what the Longshadow Man is and why he’s hunting Thistlefoot aren’t as interesting as the author’s bravura riffs connecting old and new tales and Old and New Worlds.

It may seem like a digression when the author pulls back from Isaac’s remorse over the death of his closest friend to ask, “Who gets remembered in the great American experiment? Who is forgotten? What becomes of those whose names are dust? Tell me this country ain’t haunted.”

But this gorgeously written epitaph for a hobo lays the groundwork for the novel’s riveting and moving climax, in which Isaac and Bellatine claim their extraordinary abilities as weapons against the Longshadow Man and affirmations of their heritage.

Thistlefoot is by no means a perfect novel, but it is something almost better: a book with so much on its mind that it bursts its seams to sprawl across genres and forms.

Nethercott explores more ideas than her plot can comfortably contain, but serious readers will appreciate her ambition and commitment.