THE WASHINGTON POST – Padma Lakshmi wears enough hats to generate a hyphen shortage. The host of the Bravo cooking competition Top Chef and the Hulu docuseries Taste the Nation already contains multitudes, whether she’s posting a sweet selfie with her 11-year-old daughter, Krishna, or putting the new Texas abortion ban on blast on Twitter.

Now she’s added children’s book author to her virtual CV. She recently published Tomatoes for Neela with illustrator Juana Martinez-Neal, a story of a little girl who loves to shop at the farmers market and cook with her “amma” (mother), who writes recipes, as the family anticipates a visit from her “paati”, (grandmother) from India. Along the way, the sneakily educational tale imparts lessons about where our food comes from – including the role of farmworkers – varieties of vegetables, eating produce that’s in season, and it even includes a pair of recipes using tomatoes.

We chatted with Lakshmi recently about how her daughter helped inspire the tale, her upcoming season of the docuseries Taste the Nation, and why she’s never going to have lunch with you. The following transcript of our conversation is edited for length and clarity.

Q: There are so many food lessons in the book: connection to your culture and to family, about seasonality, about the variety of foods. How do you imagine parents unpacking all those lessons with their children?

A: I hope that the book inspires families to cook more together and also inspires parents and caregivers to start cooking with their children as young as possible. I think there are things that you can ask kids to do in the kitchen, even when they’re three or four years old. My daughter’s 11 now, but I remember I would have her break the ends off beans or shell peas. Obviously, she wasn’t very fast because of her small fingers, but just giving her something to do made her feel a part of the process and made her feel really grown up. 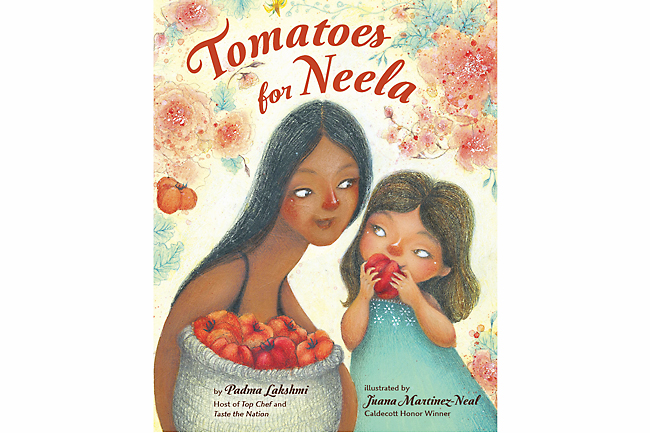 Q: Food can be a source of friction between parents and kids. What about this book speaks to a more positive way of relating over food?

A: I do know that food can be fraught for a lot of families, and that’s why I recommend picking a recipe and cooking it together, maybe at first not on a weeknight, but on Saturday and make the cooking the activity.

I think the best thing is not just to put a plate of food in front of your child and say, “You have to eat.” You can say: “We’re going to see how many fruits and vegetables we can get into our diet. In fact, I would love for half of our plate every meal to be 50 per cent fruits and vegetables.”

Make it a fun activity, make it a game. You know, you can even set up little “quick fires” with the kids competing against each other. Cooking is fun and it’s creative and it’s communal. And so if you make it an activity and get excited about it, kids are more likely to get in the spirit.

Q: You’ve said this book is autobiographical. What elements are parts of your life and experience?

A: Working in food, I often had to test recipes, and that was done around my child. Also, I take Krishna to the farmers market all the time, so she’s grown up in that farmers market and she’s a really good cook herself.

My grandmother lived in India, and her grandmother lives in Los Angeles. So the grandmother in the book is an amalgamation of both of our grandmas. Krishna calls my mom Paati, and amma is the Tamil word for mother.

Q: You work in so many different media – you’ve got a Substack, you’re active on social media, you’ve written books, and you do reality TV and a docuseries. How do you think about all these different platforms, and why add a children’s book to the mix?

A: I’ve been lucky enough to make a professional living off what naturally interests me, and most of what interests me is food. All the projects I have worked on have been offshoots of what I’ve genuinely been interested in, just from a different facet of my personality. So I don’t think they’re mutually exclusive.

I’ve always loved children’s books. I loved them even when I didn’t have children. I think they’re a really beautiful genre, and I know how important children’s books are in a person’s life because you remember the books you loved as a kid. They set your reading patterns for all your life.

I also have a lot of fully formed thoughts about children and eating and food that I never got to put anywhere. I’ve been telling Krishna about it along the way. So it was nice to have a forum to be able to do that in a more standardised way for other families.

Q: In what ways do you use food to ground your daughter in your heritage and her heritage?

A: Food is such a conversation starter. We have a ritual – although we haven’t been since the pandemic – where we go to the temple in Queens, and there’s a canteen in the basement. And I will tell you, we have definitely gotten more pious around here since that canteen opened.

So that’s our ritual, we go to the temple, we pray, we buy flowers, we go down to the canteen. We eat dosas and idli with coconut chutney and lentils. We do it a few times a year. So that’s one way to tie her to the culture.

Another way is to celebrate the different holidays with special foods. The one big holiday we celebrate is Diwali, which is always in October and November. And we make all the foods we love.

Q: Speaking of holidays, I understand that is the theme of the upcoming second season of Taste the Nation. Why focus on that, and how did you find communities to explore?

A: Because of COVID, we didn’t get to film a whole season and we only got to do four episodes, but we wanted it to feel special. Because it’s coming out in November and everyone is starting to celebrate the holidays at that time of year, we decided we would look at communities that were doing that that we could highlight.

And then we go to Miami for Cuban Christmas, which I’m really excited about. And then we go to K-town in Los Angeles, to celebrate Korean New Year, which is all about family and respecting your elders. There’s even like a component to it that feels like Dia de los Muertos where you honour the dead by making their favourite treats and making an altar to put it on. So that was interesting, too, because Korean Americans are having this brilliant creative moment with film television, K-pop, K-beauty, all these different things. So we look at that and look at how do you honour your family and still forge your own path.

So they all look at the culture, like in Season 1, but they also have this extra layer of these holidays.

Q: I’m wondering if you see your work, this broad-minded look at food with in-depth and sustained conversations, in your books and the series, as the polar opposite of your work on Top Chef, which is this very fast-paced, cutthroat cooking competition?

A: I think it’s just looking at food from different lenses. Top Chef is one lens on one side of the spectrum. Other things, like Taste the Nation and the op-eds that I’ve written, are on the same topic, but from a different viewpoint. I’ve been doing Top Chef for the last 15 years, so I developed a little bit, and I still feel very loyal to Top Chef.

It’s a wonderful show. This season we got nominated for (five) Emmys, which is more than we’ve ever gotten nominated for in our whole history of the show. So, clearly, people still love the show, because it provides a beautiful lifestyle for me and my daughter.