THE WASHINGTON POST  – Several days after finishing Stray, I’m still chewing over the right words to describe it. It’s adorable. It’s devastating. It unspools a haunting thread about humanity but also encourages you to lose a lot of time just running around doing silly cat things – leaving a trail of kitty prints through fresh paint, snoozing in a comfy corner, etc – that have zero effect on the game. That juxtaposition had me invested in the game from start to finish, and its poignant themes haven’t left my mind in the days since.

You play as an unnamed orange cat trying to return home after an ill-fated jump sends you plummeting into the sewers of a dilapidated cybercity. The androids that walk its neon-lit streets call it the Dead City, where they live among what appear to be relics of a once-human population. You team up with a small drone, B-12, that connects to a harness and can hack terminals, translate the language of the city’s robotic inhabitants and unlock clues called “memories” to learn more about what the hell happened to this place.

Before you ask, yes, the cat freezes up and falls over when it’s first put in the harness, just like a real cat would. The developers took great pains to authentically capture all the cuteness and chaos of cats in its gameplay. Playing Stray felt like a surreal 4D experience at times: There’s a dedicated “meow” button, and my orange cat Cheeto, who lay beside me as I played, perked up whenever I hit it and the sound echoed through the PS5 controller (the cat will also meow randomly – again, just like a real cat).

You can claw at doors and furniture by alternating the L2 and R2 triggers, leaving behind scratch marks, or knock things off tables just because or jump on a stack of books to send it toppling over. Some of these behaviours relate to gameplay – in one puzzle I pushed a paint can off a ledge to break a glass enclosure below, unlocking a new area – but many do not, such as getting the cat’s head stuck in a bag or curling up to take a nap.

The controller also vibrates when you purr. 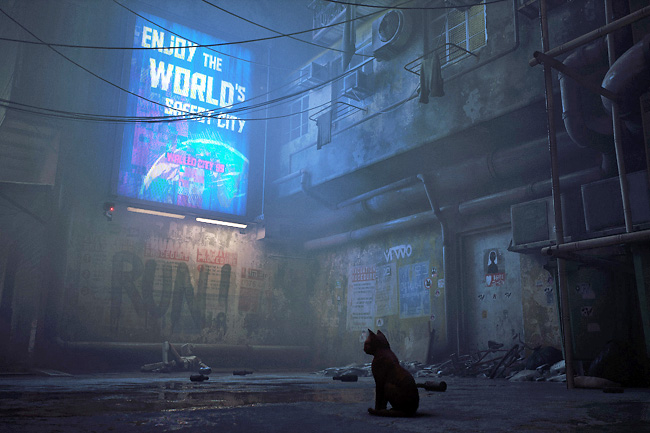 Your ability to move through the world like a cat informs much of Stray’s level design, which focusses heavily on verticality. The cramped alleyways, neon signs and towering apartment buildings crumbling in disrepair become a jungle gym as you parkour across the city, jumping from air conditioning unit to apartment balcony to telephone pole with ease. The platforming is broken up by puzzle-solving sequences that call to mind Half-Life 2 in how they seamlessly incorporate the environment into physics-based puzzles, forcing you to examine your surroundings in new ways to figure out the solution. You push planks to create walkways, for example, or slip into an overturned barrel to roll it hamster-wheel-style a few feet over to use as a step.

Stray is not a difficult game by any means, and the stakes are low: You have an infinite number of lives, and there’s no fall damage. Even still, it has no trouble establishing tension during its more action-packed sequences. The residents of the city’s slum live in constant fear of Zurks, little chittering critters that eat everything in sight and will swarm you on sight. They look like Half-Life headcrabs and latch onto you in a similar fashion. Though I knew I could just restart the level if I died, their disturbing high pitched sounds and jerky movements were no less terrifying, and whenever one got a hold of me I would panic and mash the button to shake it off. Even after you get a weapon (a ray gun operated by B-12 that fires UV rays) to fight against them, they still feel dangerous – especially in numbers. The gun can easily overheat and has to recharge when it does, and that sound of a fuse blowing with a horde of Zurks scrambling toward me never failed to make my stomach drop.

Stray is a master class in environmental story telling and level design. From your first moments in the slums, it feels like the city is alive (despite its name), a character in its own right that not only knows you’re there, but is looking out for this poor stray kitty that’s wandered into something bigger than itself. An unseen mechanical force, quickly revealed to be B-12, guides the way. Neon signs light up with arrows pointing you in the right direction, string lights that crisscross alleyways flash one by one to reveal which ledges you can jump to, and you’re followed by the gentle mechanical whir of security cameras as they track you trotting by.

Later on, after B-12 joins you directly, Stray incorporates the lights of the city – the signs, the streetlights, the soft glow from a window – in incredibly subtle way to direct you where to go, even when you don’t even realise it consciously. During a chase sequence with a horde of Zurks hot on my tail, I felt like I was making split-second decisions, but I never accidentally stumbled into an immovable object or hit a dead end. In the city itself, it rarely felt like I was being steered this way or the other, but instead like I was wandering around of my own accord, curious about whatever I caught a glimpse of in the distance. Stray’s quest structure mirrors this: Whenever I felt like I had stumbled upon a side quest, it almost always ended up looping back into the main plot somehow.

The bulk of Stray narrative is told through memories and the bits and pieces of information you glean from your surroundings as you trek upward through the city’s levels. This steady trickle of insight meant I never stopped scouring every area I entered for clues, eager to piece together the mystery of the city’s past. And I was absolutely okay with that, because Stray’s world is one you’re all too happy to bask in. I don’t think I’ve ever spent so much time in a video game doing absolutely nothing. Whenever the kitty curled up for a nap, I would just sit and vibe, watching the camera slowly zoom back to reveal more of the gorgeous setting as gentle music played, listening to the city breathe while a gentle purr echoed through my controller. I delightfully scratched up furniture and toppled book stacks and knocked things off shelves and meowed a million times (mostly because Cheeto would meow back, or go searching for another cat). No achievements or in-game incentives were needed to encourage me to be my most annoying cat self.

I suspect one of the reasons it’s so compelling to luxuriate in Stray’s world is because, for a city of robots, it’s full of life. Playing as a cat makes this easy to convey without explicit explanation: A heart will appear on a robot’s face when you nuzzle up against its leg; an angry face flashes when you cause mischief; they trip if you dart between their legs. Delighting in petting a stray cat and treating it with great fondness are traits immediately recognisable as human, even when acted out by a machine.

Stray isn’t without its faults. It flags in the third act, where it trades in platforming for stealth mechanics that feel out of place. You sneak around a stark, concrete facility that looks like it could have been plucked from any other stealth game, which is a particular shame given how memorable the other parts of the city are. Its controls are finicky at times, too, especially when trying to navigate back down to ground level, which could turn into a battle with the camera to get the jump prompt to pop up on the right surface. It wasn’t always clear why I could jump to one surface but not another either, and a lot of frustration could have been saved with some kind of mechanic to highlight the climbable ledges a la the Horizon series.

Minor complaints aside, Stray is an enrapturing experience, the kind of game that doesn’t leave your brain after the credits roll. To wit, immediately after beating the game, I jumped into the chapter select function, excited to unlock more memories and replay areas with fresh eyes.

Its ending leaves a lot of questions open that I would have liked answered, but at the same time, I’m glad they didn’t try to tie up every loose end. For one, it left me eager for more. Far too often, stories get bogged down with the why’s and how’s of every detail, muddying the waters with minutia and realism. For a dystopian narrative, Stray isn’t interested in preaching to the player. It doesn’t try to make grand statements about mankind’s hubris or shortsighted innovation. Instead, it walks you through a living, breathing city where robots have moulded their own society from the ashes of another, and lets players make of humanity’s self-destruction what they will. And that impression will stick with you long after the game ends.