On The Scene is a community project with an aim of ensuring a more secure environment by equipping the public with the knowledge and skills required to act in emergency situations.

They first conducted multiple sessions to share their knowledge on basic life support (BLS) and first aid (FA) to their university community in hopes of instilling a community equipped with skills required in emergency situations.

The success of these sessions gathered quite a reception, which led to the team receiving requests from various institutions to conduct further sessions. 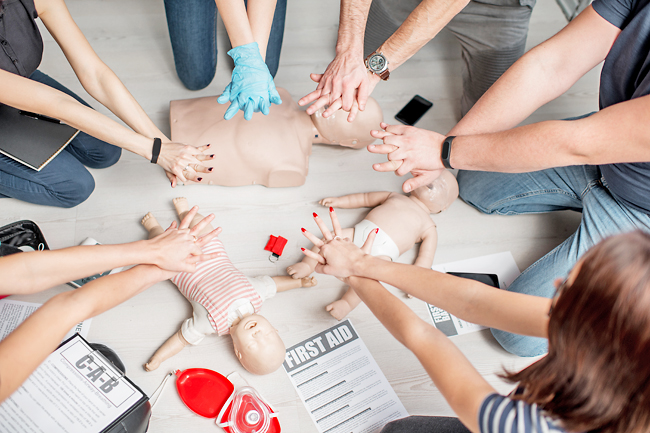 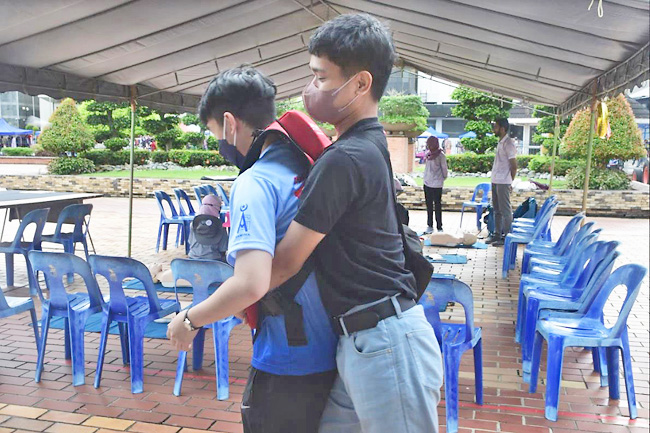 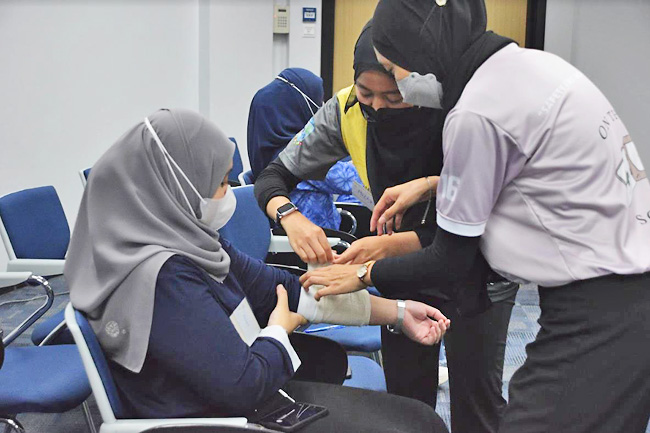 Topics from CPR, the usage of automated external defibrillator (AED) and abdominal thrusts to relieve choking were taught, while covering special scenarios such as performing the Heimlich manoeuvre on a taller casualty.

To further stress its importance, choking vests were used to demonstrate the effectiveness of abdominal thrusts in relieving choking casualties.

The management of bleeding and fractures such as pressure bandaging and splinting was also taught and practised.

To match the enthusiasm shown by the students, the team hosted a ‘Floor Game’, which addressed common misconceptions and myths.

“They did pretty well in explaining which made it easy to understand. The whole course was very easy to follow and I especially enjoyed the quiz,” shared a student who participated in the game.

The On The Scene team then took a step further to promote their project by conducting sessions for the public at large over events held during Bandarku Ceria.

Three sessions were conducted by the On The Scene team, spanning every two weeks from August 21 to September 18.

Each session consisted of CPR sessions and a first aid booth with interactive games and activities. The public was very engaging and responsive, with the majority of the CPR sessions being fully booked in advance and a good flow of participants was seen in the first aid games.

All winners were given vouchers entitling them a chance to win exciting prizes. The public was also engaged in answering the team’s quiz on CPR and first aid constructed according to exclusively designed informative posters. These posters are available for download through the team’s official website onthescenebn.com.

A participant of On The Scene’s CPR session expressed their satisfaction in the session saying, “My partner who is currently a PhD candidate and a teaching assistant at UBD was proud of and kept praising the members on their fluency and deep understanding of what they are conveying to the public. Overall the experience has been fantastic and we look forward to more events like this in the near future.”

An essential part of high-quality CPR is the required depth of five centimetres and rate of 100-120 compressions per minute.

The team garnered more attention from the public utilising an application called ‘QCPR training’ which allowed the depth and rate of compressions on the manikins to be measured.

The public took the opportunity as a challenge and competed to get the highest efficiency in chest compressions. This piqued the attention of the public and motivated them to join official BLS and FA training.

To further reach out to the public, multiple interviews were conducted and filmed during every Bandarku Ceria session.

Various members of the public were selected and asked questions regarding their understanding of BLS and FA.

Any misconceptions or myths were addressed during these interviews. These videos can be found on the team’s official Instagram account.

Additionally, on October 2, in conjunction with Gleneagles JPMC’s commemoration of World Heart Day, the On The Scene team conducted their final intervention with the additional aim of complementing the Ministry of Health’s goal of raising awareness regarding cardiovascular diseases which constitute a significant risk factor for cardiac arrest.

Participants and numerous booth visitors expressed their gratitude for making available such an opportunity for the public to gain knowledge regarding BLS and FA.

The team also donated BND1,000 from the proceeds of their merchandise sales to Brunei’s HEART (Humanitarian Emergency Aid Response Team) Volunteers Group, a non-profit non-governmental organisation, with hopes of complementing their ongoing objective of providing humanitarian relief during natural disaster and services to those in need, such as cardiac patients.