A matter of inclusivity

A new policy brief from the Asia-Pacific Economic Cooperation (APEC) Policy Support Unit highlights the importance of promoting equity and inclusivity in the transition towards a low-carbon economy.

Titled Transitioning to a Sustainable Economy while Ensuring Inclusion, the policy brief seeks to provide a better understanding of the critical factors that need to be put in place to ensure that APEC’s transition to low carbon does not leave anyone behind.

In a press statement, senior researcher with the APEC Policy Support Unit Rhea C Hernando said, “There is no denying the impact of climate change to our economy and society. For example, without climate change action, the APEC region could absorb losses of up to 18.3 per cent of GDP by 2050.

“There are also significant health consequences – rising temperatures could worsen respiratory illnesses while frequent rainfall could give rise to outbreaks of malaria and dengue fever.”

It is estimated that by 2030, the direct costs of climate change to health could reach around USD2 to USD4 billion per year, said the statement. The APEC region represented about 60 per cent of global greenhouse gas (GHG) emissions in 2019. 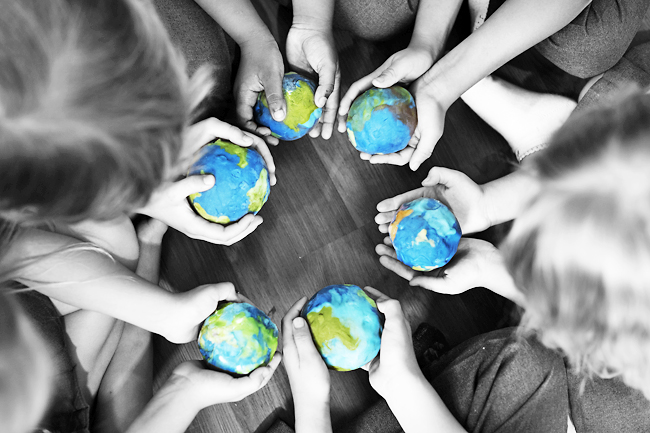 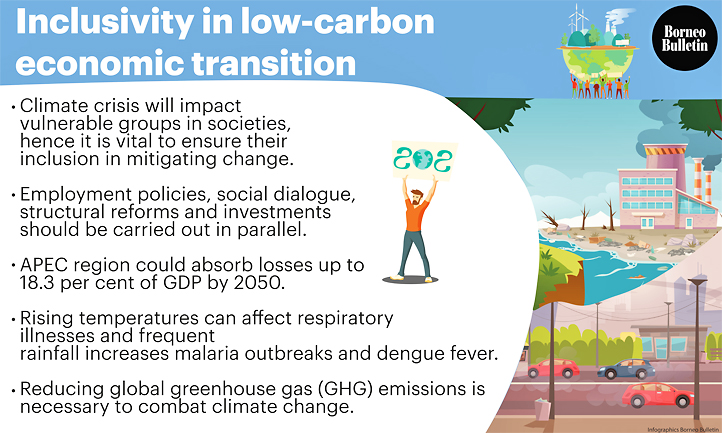 According to the statement, the policy brief warns that the climate crisis will disproportionately impact vulnerable groups like women, the poor, workers, people with disabilities and indigenous people across the region.

Also mentioned is the importance of understanding that pursuing the low-carbon economy should not be at the expense of equity.

“The transition to low carbon should ensure their inclusion, particularly their capacity to access decent work opportunities,” Hernando said.

The policy brief puts forward several key messages, one of which pertains to ‘just transition’, which it explains is “a framework that aims to maximise the advantages of transitioning to a low-carbon economy while promoting equity and inclusivity”.

As Hernando elaborated, “The prime directive of a just transition is to create ‘decent work’ opportunities, support people whose livelihoods are highly dependent on carbon-intensive sectors and reduce the negative impact of the shift to a low-carbon economy on marginalised groups.

“Employment policies, social dialogue, structural reforms and investments, should be carried out in parallel.”

“At the economy level, policy responses and support initiatives in the transition period could vary, and would be largely dependent on prevailing economic conditions, available resources and priorities,” said the report.

“At the international level, cooperation and an open dialogue are needed to discuss financial, technological and other related issues to boost the global economy’s resilience amid the transition period.

“Nevertheless, it remains imperative that economies must prepare for the shift to low carbon by nurturing a conducive environment that enables a smooth, steady, and especially inclusive transition. This requires comprehensive, coherent and coordinated policies across economic, environmental, social and labour policies.”

The report highlights that supportive labour market policies play an instrumental role in ensuring that communities and affected groups thrive in a low-carbon economy.

“Key labour market policies to ensure that affected groups and communities thrive in a low-carbon future are essentially two-pronged and must be implemented at the same time.

“On the one hand, labour policies should take into account the provision of financial support and social protection for job losses and worker displacements; and on the other, policies should also open up and/or widen opportunities for education, training, reskilling and upskilling, and career development.”

The policy brief also underlines the importance of implementing structural reforms. “These reforms require macroeconomic policies that promote sustainable production and consumption, a conducive environment for sustainable enterprises, incentive designs that stimulate enterprise innovation, as well as an appropriate mix of taxes, subsidies and loans to encourage the shift.”

In addition, it notes that trade and investment policies could be further adjusted to spur green industries and boost green jobs and innovation.

Another of the report’s key messages is that digitalisation has the potential to hasten the transition to a low-carbon economy, noting that digital technologies can be harnessed to improve energy efficiency and reduce GHG emissions.

However, the policy brief also points out that digitalisation comes with its own challenges.

These include: lack of digital skills and inadequate infrastructure; risks relating to cybersecurity and data privacy; as well as legal and regulatory challenges that need to be sufficiently addressed to keep up with the dynamic digital changes and prevent risks from materialising.

“Given the crucial role of digitalisation, the level of digital skills and technological readiness of APEC economies play a key role in transitioning toward low carbon. Building information modelling applications, business intelligence and data analytics, technology road mapping, and artificial intelligence applications are some examples of digital skills that support the transition to low carbon,” said the report.

“Since the objective is to ensure inclusion and promote equity, these dialogues and engagements need to include vulnerable and under-represented groups,” said Vasquez.

The statement added that by applying a just transition framework, member economies put the welfare of the society and communities first.

“This mindset will affect actions taken by governments and steer policies toward building a sustainable and inclusive future for all.”