AUGUSTA, GEORGIA (AP) – The storms that stopped play for a little more than hour on Saturday at the Masters were expected. The masterpiece delivered by Hideki Matsuyama (pic below) after the break was not.

Matsuyama played the final eight holes in 6-under par, turning a two-shot deficit into a four-shot lead. With four flawless swings and three putts late on the back nine at Augusta National, he went from part of a logjam on the leaderboard to the cusp of becoming the first Japanese player to win a major. The final touch was a superb par save from 25 yards behind the 18th green for a 7-under 65, the only bogey-free round this week at the Masters.

“I wouldn’t have believed it,” Matsuyama said through his interpreter. “But I did play well today. And my game plan was carried out, and hopefully, tomorrow I can continue good form.”

It all started in his car, where the 29-year-old waited out the storm delay. Part of the time was playing on his phone. He also thought about his last shot, a drive into trees right of the 11th fairway.

“During the rain delay, I just figured I can’t hit anything worse than that,” Matsuyama said. “And so maybe it relieved some pressure. I don’t know. But I did hit it well coming in.” 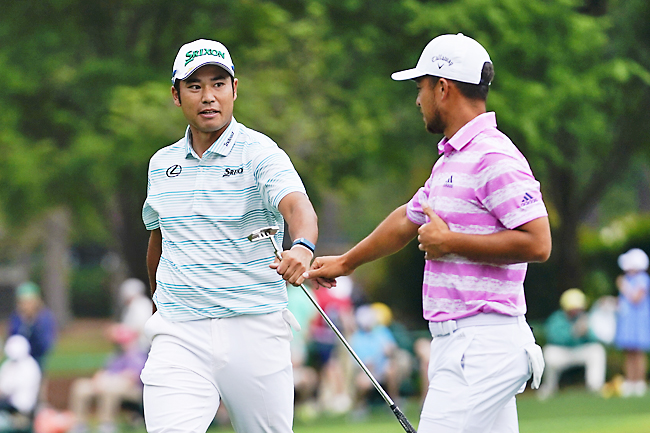 Matsuyama was at 11-under 205, four shots clear of Xander Schauffele (68), Justin Rose (72), Marc Leishman (70) and Masters rookie Will Zalatoris (71). It was 10 years ago when Matsuyama first played in the Masters as the Asia-Pacific Amateur winner. He learned then he could handle Augusta National as the only amateur to make the cut in 2011, finishing on the same score (1-under 287) as defending champion Phil Mickelson.

“If Hideki plays well, he can control his own destiny, I guess,” Leishman said. “But a lot can happen around here. I’ve seen what can happen. I’ve had bad rounds here myself and I’ve had good rounds. You can make up four shots fairly quickly, but you have to do a lot of things right to do that.”

Matsuyama did just about everything right, starting with his first shot after the delay — a seven-iron he punched under the trees and onto an 11th green slightly slowed by the moisture to 20 feet for birdie. After his birdie from 10 feet on the 12th, Augusta National came to life. Imagine the roars if there had been a full capacity of spectators.

In a sequence that took no more than two minutes, Schauffele ran in a 60-foot eagle putt across the 15th green to momentarily tie for the lead at 7-under; back on the 12th, Rose made a 25-foot putt for his first birdie since the second hole, giving him the lead at 8-under.

That lasted as long as it took Matsuyama to cash in on his seven-iron to the 15th by making a five-foot eagle putt to reach 9-under, his first time in the lead. And no one could keep up.

“I’ve been playing with the lead the whole week, and obviously there’s been an hour where Hideki has sort of moved out there in front,” Rose said. “All the guys chasing at 7-under par are all capable of that little run Hideki has had. So it’s all up for grabs tomorrow.”

Matsuyama followed with an eight-iron to five feet to the front right shelf on the par-3 16th for birdie, and his pitching wedge to the back pin on the 17th had enough spin to settle 10 feet from the hole for another.

Corey Conners had a hole-in-one on number six in a 68 and was at 6-under 210. Jordan Spieth was within two shots of the lead despite a double bogey on the seventh hole, but he couldn’t keep pace and shot 72 to fall six shots behind.

Matsuyama will play in the final group with Schauffele, a comfortable pairing. Schauffele’s mother was raised in Japan and he speaks enough Japanese to share a few laughs with Matsuyama during Saturday’s pairing.

That won’t eliminate all the pressure. A major is on the line, and no other course than Augusta National is capable of serving up surprises.

Matsuyama’s lone shot at a major was at Quail Hollow in the 2017 PGA Championship when he was one shot behind with three holes to play and missed a crucial par putt. He was in tears after that round, a player under enormous pressure in golf-mad Japan.