A love story for the ages

ANN/CHINA DAILY – Xu Guizhen and Cao Zhenwei (China Daily, pic below) were both born in 1926 and have known each other since they were 16 years old.

After nearly 70 years apart, they have finally reunited and, at the age of 94, registered for marriage. Their experiences together, including accounts of their life in a nursing home, have gone viral, touching countless people online.

Xu and Cao’s fathers were very close friends and operated a photo studio together in Weihai, Shandong province. In 1937 they moved to Shanghai.

Xu met Cao at the photo studio in Shanghai. Xu’s father liked Cao very much and hoped that he would marry his daughter, but since Cao was already engaged, they ended up living separate lives and having their own families.

Cao said Xu moved back to Shanghai after she got married, but not long afterwards, they parted for the last time, as she ended up moving several times.

In 2019, Cao, 93, met Xu’s younger brother at a reunion and asked him about his sister. Encouraged by his brother, Cao called Xu and they were finally reunited. 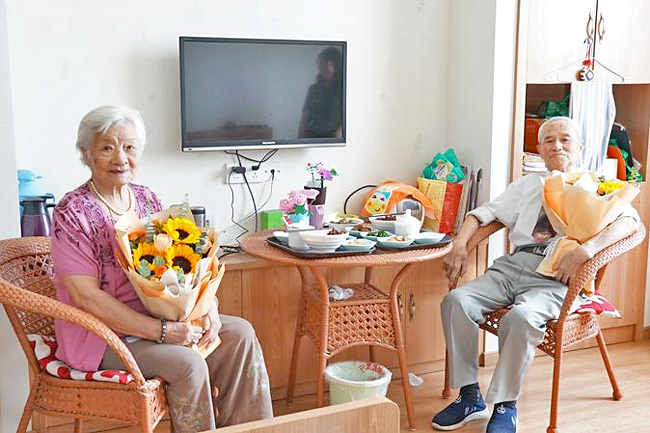 “When I received the phone call, I knew it was him as soon as I heard his voice. I planned to meet him at the subway, but I was worried that I wouldn’t recognise him, because I hadn’t seen him for years,” Xu recalled.

“But he was very smart. He went to the neighbourhood committee first and asked them to call me. When I walked out, I saw him,” Xu said, adding that they reminisced about the past and had dinner together. After that, they kept in touch by phone.

Very soon after, the couple decided to spend the rest of their lives together and registered for marriage in 2020.

“Although we hadn’t seen each other for nearly 70 years, we still felt very familiar with each other. We are all lonely and want to find a partner. This is fate, which is unexpected,” said Cao.

After getting married in September 2020, they moved into Fortune Care Shanghai Kangtai Nursing Home, where they share a room of 30 square metres.

Xu noted that her daughter was worried about her living alone, so she decided to move into a nursing home. After Xu told Cao that she was moving, he decided to go with her.

With the help of the Civil Affairs Bureau and the neighbourhood committee, they got a marriage certificate very quickly.

“The nursing home also sent out wedding candies for us. It is our home now and we also don’t want to bother our children. We can take care of each other here,” she added.

Their life in the nursing home is very fulfilling. “We get along very well. After living here for more than two years, we have got used to it and adapted to the environment. When the weather is good, we go downstairs to do tai chi or take a walk, and we watch TV. In the nursing home, we are like one big family,” Xu said.