THE WASHINGTON POST – Moments after laying out his vision for the country with his own broad, bold brushstrokes, newly inaugurated United States (US) President Joe Biden set his sights on another hopeful vision of America. At the inaugural gift-giving ceremony in the Rotunda at the US Capitol, Senator Roy Blunt presented Biden and First Lady Jill Biden with Landscape with Rainbow an 1859 painting by Robert S Duncanson, a Black landscape artist in Civil War-era Ohio.

The first lady, who helped select the painting from the Smithsonian American Art Museum, pointed to the rainbow, an uncommon feature in antebellum landscape paintings, as a good omen. “I like the rainbow,” she said. “Good things to follow.”

Working in a nation on the brink, Duncanson looked to the landscape: marred by the displacement of Native Americans, cultivated on the backs of enslaved people, soon to be the site of a bloody war. In it, he found a rare, radical hope – it came as a gray-toned rainbow, an elm tree symbolising freedom and an idyllic valley scene.

A century and a half later, hope arrived again in the small miracle of having his work – the first inaugural painting by a Black artist – displayed in a space that, just two weeks earlier, had been desecrated by a Confederate flag-carrying mob.

Duncanson painted Landscape with Rainbow while living on the edge of another America: in Cincinnati, across the river from the slave state of Kentucky. Not unlike talk of healing from a leader who has experienced extraordinary personal loss or words about democracy prevailing, spoken on the very steps of a recent insurrection, Duncanson’s restrained rainbow feels solid, unshakable. We trust those who have seen the worst when they believe in the better. Their sentiments, painted thick with experience, have weight.

The Duncanson landscape marks an obvious thematic departure from Donald Trump’s controversial inaugural painting The Verdict of the People. A crammed, cartoonish scene, the 1855 painting by George Caleb Bingham depicts a White electorate reacting to a political victory for the Democratic Party, which defended slavery at the time. In the foreground, a Black man pushes a wheelbarrow.

But Duncanson’s work also is a more subtle ideological shift from landscape paintings chosen in the past.

Presented to President Ronald Reagan in 1985, the first inaugural painting – Jasper Francis Cropsey’s Autumn – On the Hudson River (1860) – captured “the raw power and grand scale of the landscape and the strength of human enterprise”, the congressional inaugural committee wrote at the time. Duncanson embraced the landscape genre to achieve a more complicated end. With tiny figures and enveloping valleys, his landscapes do not make a grandiose claim to the land. Instead, they ask humbly and humanly for a place in it.

“There’s that whole tradition of bombastic landscapes where it’s a Wagnerian aria going on in the sky and mountains and storms and all of the rest of that,” said Eleanor Harvey, the Smithsonian American Art Museum curator who helped Jill Biden select Landscape with Rainbow. But not so with Duncanson, Harvey said, “He’s looking for peace.”

In Landscape with Rainbow, diagonals in the foreground weave you into the image. Crisscrossing grass and gravel creates an uneven sightline, evoking the sensation of finding your footing in the woods. The undulating landscape – its homeward-bound cows, a couple traversing a dirt road, the man pointing toward the end of the rainbow – draw your gaze ever so slightly rightward. Lacking a decisive, climactic focal point, this is not a painting with an obvious conclusion. Among the trickling, small waterfalls; languorous path; the reassuring, unostentatious rainbow, it asks you to stay awhile.

Pointing to such Duncanson landscapes as Loch Long and On the St Anne’s, East Canada, Harvey praised their “therapeutic quality”. “These landscapes make you want to stop and just look, maybe eat lunch, sit down and just stare at them,” she said.

Such tranquility was in stark contrast to Duncanson’s reality. Born free to an African American mother and a Canadian father in Seneca County, New York, in 1821 – the year after the Missouri Compromise would slice the country into competing halves – his life spanned an era of instability and violent division.

He was trained as a house painter, where he probably encountered fine art on his customers’ walls, and he eventually taught himself by copying portraits and landscapes. At 19, Duncanson moved to Cincinnati, a growing arts and abolitionism hub, where he would see works by Hudson River School painters such as Thomas Cole’s The Voyage of Life series, which came to the city for a sale through the Western Art Union. He got his start painting fruit and portraits, and he eventually earned a major commission creating murals for the home of wealthy banker Nicholas Longworth (now the Taft Museum). From an unlikely base, away from the New York art world and on the border of what would soon become the Confederacy, Duncanson became the most well-known African American artist in the US.

His artistic aspirations intertwined with antislavery causes, with many abolitionists as patrons. Hailed in the media – always with a mention of his race – Duncanson’s artistic skills were used to strengthen their cause against slavery.

A curator at the Cincinnati Art Museum Julie Aronson noted that landscape painters often embedded moral attitudes in their work.

“This may be related to politics, to spirituality, man’s relationship with nature,” she said. Images such as Duncanson’s Pompeii, which depicts a decaying ancient city, “can be a reference to the decline of civilisation and moral lesson as to what could happen if we continue down this path”, she said.

Some scholars argue that Duncanson intentionally placed abolitionist symbolism into his work by changing the content of source material. When he painted Cincinnati From Covington, Kentucky, which was based on an image from a magazine, he added enslaved figures on the Kentucky side of the river. In another work, a copy of Frederic Church’s Heart of the Andes, he inserted a skirmish between Native Americans – another marginalised group – and American soldiers into an otherwise serene landscape.

But others aren’t convinced. A curator at the Detroit Institute of Arts Valerie Mercer noted that when Duncanson engaged themes of race most directly – in the DIA’s Uncle Tom and Little Eva – he did so reluctantly, for a commission. In a letter to his son, the artist wrote, “Mark what I say here in black and white: I have no colour on the brain, all I have on the brain is paint.”

Perhaps more overt references in his work to race or politics would have felt redundant. A place of both refuge and violence, freedom and capture, the landscape itself was political. By leaning into the calm of the landscape, Duncanson quietly defied his difficult circumstances.

Like many of his works, the composition of Landscape with Rainbow, with its sweeping, concave valley and raised edges, enfolds you into it.

At a time when so many have felt scorned by those in power, the choice to highlight Duncanson’s work in the People’s House resonates with the start of a new era.

“If there’s anything that speaks to Duncanson’s life,” Harvey said, “it is the idea of a landscape that is welcoming you home.” 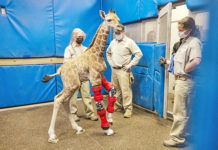 Bracing for her future 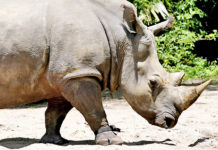