THE WASHINGTON POST – Somewhat surprisingly, London’s venerable British Library has emerged as a major player in the reissuing of early-20th-Century popular fiction. After immense success with a line of Golden Age mysteries, it recently added imprints devoted to classic weird tales, women’s novels from before World War II and early science fiction.

Some titles are issued in the United States by Poisoned Pen Press, while the others can be ordered online or through your favorite bookstore. Nearly all are worth seeking out.

Consider, for example, The Question Mark and The Man With Six Senses both by Muriel Jaeger. Originally published in 1926 and 1927 by Leonard and Virginia Woolf’s Hogarth Press, the two novels are HG Wellsian works of technological, political and
social extrapolation.

The first depicts a socialist utopia of the 22nd Century, and the second tracks the life of a flawed “superman” and the effect of his powers on himself and those closest to him. In both, action is subordinated to argument, as the characters converse about society, class, sex and marriage, religious belief and human evolution. 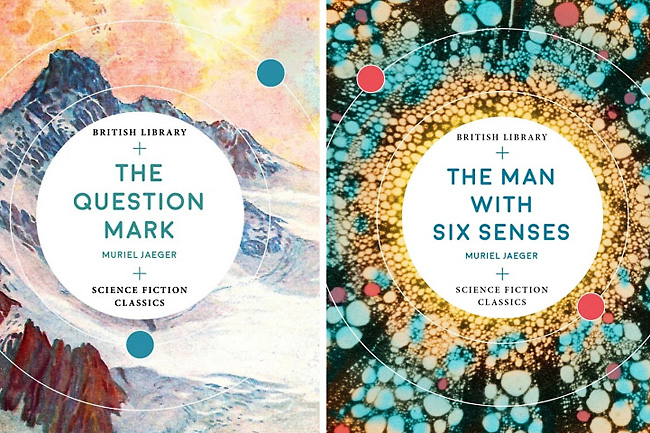 Such high-minded discourse fits with Jaeger’s intellectual background. Born in 1892, she became one of the first graduates of Somerville, Oxford’s famous women’s college, where she was a close friend of Dorothy L Sayers (who dedicated her first Peter Wimsey mystery, Whose Body?, to Jaeger).

Though she went on to produce four novels of ideas before her death in 1969, none of Jaeger’s books gained a wide readership, though they are now being rediscovered.

Appropriately enough, this British Library edition of The Question Mark is introduced by Mo Moulton, author of the recent and pioneering group biography The Mutual Admiration Society: How Dorothy L Sayers and Her Oxford Circle Remade the World for Women.

The Question Mark focuses on Guy Martin, an aggrieved bank clerk who “always believed that he could have done great things (the nature of which remained unspecified) if he had only been given his chance”.

Failing to turn friendship with an aristocratic young woman into something more, a despondent Guy wills himself into a deathlike sleep, eventually awakening in a seemingly idyllic socialist future.

His first sight of 22nd-century London reveals Jaeger’s flair for prediction: “In a neighbouring field a gleaming, smokeless machine was mowing grass at an astonishing rate, apparently quite unattended, moving up and down the broad rows and turning at the ends with a quaint military precision.”

Besides self-driving lawn mowers, Jaeger’s utopia also includes personal-size helicopters, rather like ride-share bikes, virtual-reality cinemas and pocket-size power boxes, through which one can operate all sorts of devices.

While Guy initially oohs and aahs at what he regards as a socialist dream come true, Jaeger soon reveals that society has divided into two classes: intellectuals and normals. The intellectuals are logical, emotionally low-key, fond of debate, creative. The normals, by contrast, are exuberant, susceptible to fads and fancies, highly physical. No gradation exists between the two: You are born either a knowledge-acquiring intellectual or a sensation-seeking normal.

To which class does Guy belong? He repeatedly shows a worshipful, homoerotic attraction to John, his chief guide to this brave new world, even as he remains unaware, and then disdainful, of the rapt adoration bestowed on him by the normal Ena. His encounter with a charismatic preacher does lead Guy to question the callousness of the elite, though not enough to initiate a revolution. He is simply too much a nebbish. Instead Jaeger lays bare the spiritual ennui of a leisured civilization without real purpose.

Jaeger’s marked antipathy to classifying people in binary terms, whether social, sexual or psychological, continues in The Man With Six Senses. The book’s narrator, Ralph Standring, is wealthy, self-important and determined to marry Hilda (whose last name we never learn) – mainly, it seems, because his late mother wanted him to. But while Ralph enjoys a tempestuous affair in Italy, Hilda goes off to Oxford and comes to know Michael Bristowe.

Michael, it turns out, possesses the ability to perceive objects he cannot see. At first, this talent seems akin to dowsing – the sensitive young man can “feel” metal underground and even detect the presence of a buried corpse. Ralph dismisses such extrasensory perception as more liability than gift, especially since Michael grows increasingly frail by exercising his powers and comes to depend on Hilda for friendship, stability and reassurance.

Could Michael represent the next stage in humankind’s development?

Whatever the personal sacrifice, Hilda deems herself obligated to ensure that his sixth sense is fostered and preserved. As in her first novel, Jaeger’s principal characters are more interesting than likable.

The vampirically needy Michael, the snobbish and pompous Ralph and the increasingly fanatical Hilda might have stepped out of a Strindberg closet drama – three studies in mutually inflicted torture.

Like The Question Mark too, The Man With Six Senses avoids not just a conventional happy ending but any clear-cut ending at all. Instead, Jaeger means for us to reflect on the competing issues – of morality, social progress and self-fulfillment – laid out in her impressive, albeit rather dour, scientific romances. Happily, these British Library reissues give us another chance to do just that.