THE WASHINGTON POST – I’ve never watched a full day of golf on television and with few, rare exceptions, I find it hard to invest the energy into televised sports the way some of my family and friends do. Yet I’ve long enjoyed arcade-style sports games which add a bit of silliness into the mix. The last sports game I got into was Mario Tennis Aces, so I was cautiously optimistic when I heard that the Switch would be receiving a new Mario Golf game from the same developer.

Mario Golf: Super Rush does a fair job of injecting a bit of levity into the otherwise staid game by fusing the familiar trappings of the Mushroom Kingdom, such as Piranha Plants and lava lakes, with golf mechanics that can be approached either casually or in a more methodical fashion. A touch of the A button sends a gauge on the right side of the screen sliding up and down to determine a shot’s power. Tapping on either the A or B button again determines the type of spin placed on the shot – eg, top spin adds momentum to a ball so that it rolls further along the ground after it lands while bottom spin curtails its roll.

In the quick interval between initiating a shot and striking a ball, you can also use the left thumb stick to adjust the curve of a shot so that it travels in a higher or lower arc or hews to a right, or left, trajectory. On a more granular level, you can also pull up a grid that shows the elevation of the surrounding area allowing you to better assess how the slope of the land might affect your shot, along with wind speed and weather conditions.

I bumbled my way through Super Rush racking up too many bogeys to count, but that’s OK because apart from its single-player campaign, otherwise known as Golf Adventure, I never felt any pressure to keep my scores below par. One can unlock the courses, which range from a rocky landscape pocked with mini-tornados, to a tried-and-true Bowser’s castle, etc, by completing events in the campaign mode or by schlepping through an 18-hole game on the last, unlocked course. This type of progression adds to the sort of chill vibe one would expect from a Mario golf game.

In Golf Adventure, players create an avatar and then try to climb the ranks from scrub to pro by taking on different challenges ranging from competing in timed matches against other characters from the Mario universe, like Toadette and Chargin’ Chuck, to tackling, for example, in any order, a nine-hole course in under forty strokes. Super Rush is also divided into Standard, Speed, Battle and online multiplayer modes whereby players can choose from a roster of Mushroom Kingdom characters and compete in one-off matches. 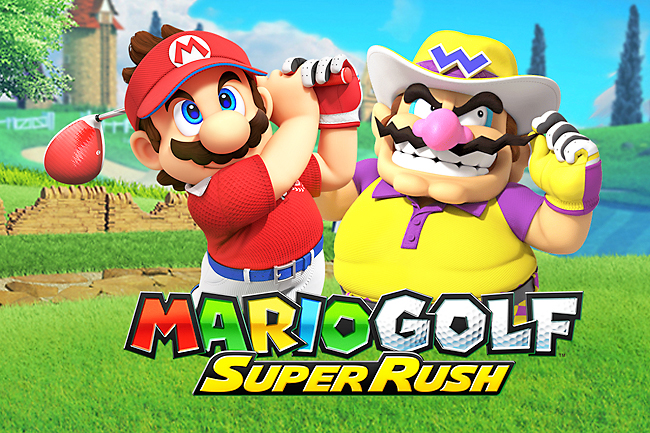 Standard Golf is just what you’d expect: straightforward golf but with the added flourish of Super Shots. By filling an energy metre, which replenishes automatically over time, Mario, or one of the gang, can let loose a power shot that can send a ball hurtling to the faraway green. In Speed Golf and Battle Golf you fill up the energy metre by picking up coins strewn across the course. These modes both add an extra layer of physical high jinks to the game since players must chase after their golf balls. Pressing the B button causes an avatar to sprint, depleting a stamina metre that refills by laying off the sprint button or picking up a heart off the ground. If your stamina is high enough you can press the L button to dash which makes a character move considerably faster and can be used to stun opponents who aren’t dashing themselves.

Naturally, Speed Golf adds a timer to each shot. Players can compete against each other or against computer-controlled avatars to finish a course with either the best score or the fastest time. In Battle Golf, players faceoff in a stadium environment where they are given free rein to tackle any holes in the area, in whatever order, they choose. Given that Battle Golf is the mode that offers the most in the way of visual pizazz – with lighting strikes and such – I feel like an opportunity was missed by not staking the action in a less generic-looking environment.

In truth, I wish Mario Golf: Super Rush was a bit zanier. The dash mechanic and the Super Shots are fine, but I can’t help thinking that the courses could have been a bit more whimsical than, say, the arid landscape of Balmy Dunes. Oh well, at least it reminded me of how much I enjoyed tennis. 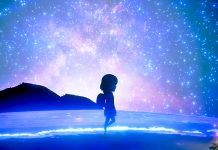 Simplicity can be deceiving 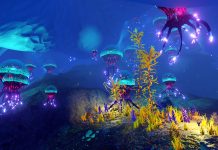 Hold your breath and dive in 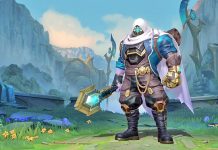 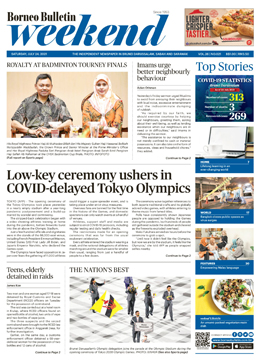