THE WASHINGTON POST – To the untrained eye – and even a trained one – penguins look alike. But for Charles Bergman, one king penguin stands out. On a trip to the island of South Georgia in 2011, the seabird approached the nature photographer and writer, threw its head back and released a sound that Bergman describes as a kazoo. It emitted the sound over and over. After completing its vocal performance, the penguin looked at Bergman and waited for a reply.

Bergman has spent over a decade searching for the correct response to that penguin’s query, a pursuit he documents in his book Every Penguin in the World: A Quest to See Them All. He and his wife Susan Mann travelled thousands of miles, often to inhospitable destinations, to see all 18 penguin species – a listening tour, of sorts. “Animals are talking to us. They are calling us,” the retired English professor wrote. “We have only to learn to listen.” We recently spoke with Bergman about his penguin mission and what lessons he has learned since that fateful meeting with a king.

A: The first penguin was a Gálapagos penguin in the Galápagos Islands (in 2003). The coolest part was getting to swim with them. That got me interested in penguins, but the encounter that hooked me was with a particular king penguin on South Georgia Island, about 900 miles off the coast of Argentina. I was trying to photograph a group of penguins on the shoreline with mountains behind them covered in snow. I was crawling toward them, and as I lay there, I realised that a penguin was at my feet. It was pecking at my boots and pulling at my pants with its beak. Pretty soon it was right beside my face, looking down at me. It raised its beak and gave out a penguin call. It was an identity call. In these huge groups of penguins – king penguins can breed in colonies with 250,000 pairs – they find each other by their call. So when they call like that, they are saying, “This is who I am. I am here. Who are you?” I was having a conversation with a penguin, and it expected me to call back and say who I was. The book is an answer to that penguin: Who am I in relation to this penguin?

The response to that king penguin could have taken a number of different forms. But a year and a half later (in 2011), on Robben Island in South Africa, my wife and I volunteered with a programme that researches African penguins. We spent two weeks helping scientists capture, weigh and measure baby penguins. We did it over our anniversary and realised that it was our 10th wedding anniversary and our 10th species of penguin. There was something about the symmetry of that moment that made us commit to seeing them all.

African penguins are “urban” penguins. Just go to Cape Town and you can find them on nearby Boulders Beach. The little penguins in Australia and New Zealand are quite easy to see. The Magellanic penguins in Tierra del Fuego, Chile, and Argentina are quite easy to see. If you go to the Antarctic Peninsula, you can get three or four penguin species pretty easily. Beyond that, there’s South Georgia and the Falklands. Expedition cruises go there. Then you move to another level: New Zealand and sub-Antarctica. The erect-crested penguin is endemic to the Bounty Islands and the Antipodes Islands; the royal penguin is found only on Macquarie Island; and the Snares penguin is only on Snares Islands. An expedition cruise visits all of these islands. 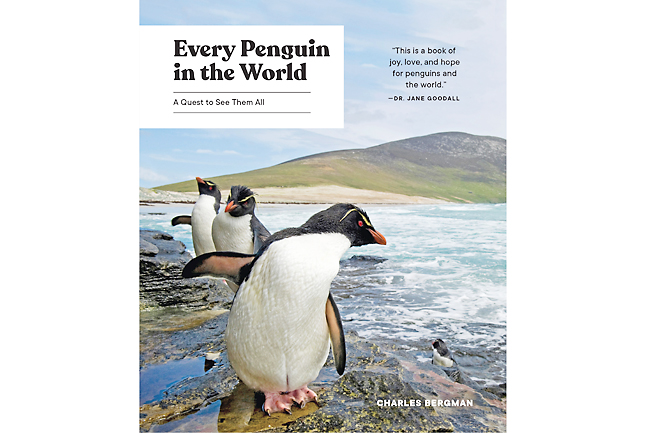 I have a scale of one to five, and the number five hardest are the emperor penguin and northern rockhopper. The emperor penguins because the only way to maximise your chances of seeing them is on a trip that specifically goes to a colony of emperor penguins. You will have to travel during the late Antarctic winter or early spring and be on an icebreaker. The northern rockhopper is only found on the Tristan da Cunha Islands, halfway between Cape Town and Rio de Janeiro. It is in the middle of nowhere. We went with a company that was repositioning its boat from Antarctic waters to Arctic waters. We spent five weeks travelling up the middle of the Atlantic Ocean, stopping on South Georgia Island, Tristan da Cunha Islands, Saint Helena Island, Ascension Island and Cape Verde. Five weeks for what amounted to a half-day with rockhoppers.

When you get on shore, there’s a lot going on, and it’s hard to orient yourself. I will walk quietly down the beach, among the penguins, and take in the scene and the situation. I will find a place where I can sit and get a sense of what the penguins are about. Then I will wait for the penguins to tell me what kind of experience I will have with them. It sounds funny, but it’s true. For example, on Saunders Island on the Falkland Islands, I was in an area called the Neck, a little isthmus. I was watching them play in the surf all afternoon when this great sunset started to appear. I thought I would photograph the colony of Gentoo penguins watching the sunset. I was busy setting up the camera gear and looked up and the penguins had all turned around and were looking at me. I had become the show. It was a better photograph because their silvery white fronts were facing me and they lit up under the burning orange sky.

First, they’re just cute. Then you put them in these great scenes, and they’re extremely photogenic. But what it comes down to is that they remind us of us. There is an anthropomorphic quality about them. They are like children and they evoke a parental affection in us.

Penguins, with their beauty and vulnerabilities, deepened our love of the planet and its creatures. Their combination of joy and calm is unique. My wife and I call it the “penguin glow”. That quality is magic and something you want to hold onto. It gives them a special power over our imaginations and our hearts.