THE WASHINGTON POST – Based on Netflix’s ‘Spirit Riding Free,’ a cartoon series about the adventures of a trio of horse-loving 13-year-old girls, DreamWorks Animation’s “Spirit Untamed” is a serviceable if undistinguished entry in the franchise that began in 2002 with ‘Spirit: Stallion of the Cimarron’ (a hand-animated Oscar nominee with which this pretty but somewhat sterile CGI spinoff has little in common, other than the titular wild mustang). Along the way, there have been such other spinoffs as “Pony Tales” and “Riding Academy.”

Set in the 19th Century, the story opens in the American frontier town of Miradero, with tastefully choreographed tragedy: the accidental death, while performing, of a trick equestrian who turns out to be the mother of a toddler.

Fast-forward several years: That toddler grows up to be the protagonist Fortuna, aka Lucky (voice of Isabela Merced). As the story gets underway, the now teenage Lucky is finally reuniting with her father (Jake Gyllenhaal), who, traumatised by his wife’s death, handed off the care and feeding of his daughter to his sister Cora (Julianne Moore) back East, hoping that Lucky would never see a horse.

No such luck. On the train to Miradero with her Aunt Cora, Lucky spots – and falls in love with – a wild stallion running alongside.

Upon her arrival in Miradero, she quickly joins up with the local horsy set, including two riders her age, Abigail and Pru.

Together, they spend most of their time, against the wishes of Lucky’s father, hanging out at a ranch belonging to Pru’s father (Andre Braugher). There, the mustang, dubbed Spirit by Lucky, is being broken by a group of horse thieves led by an unscrupulous wrangler (Walton Goggins).

When the wranglers reveal their plan to steal Spirit and his herd and ship them off to the highest bidder, this sets up a lot of dangerous misbehaviour by Lucky and her pals. (The initials of their names conveniently form the acronym PAL, which becomes the girls’ collective nickname.)

For a PG-rated film, there’s an unusual amount of life-threatening derring-do: The PALs hurtle heedlessly on horseback at breakneck speed over precarious precipices, and do other things you shouldn’t try at home – or anywhere, for that matter. All of these things are laughed off with a bizarrely breezy disregard. This may be the first kids movie where the line “I almost died!” – quite accurate, by the way – is delivered more than once, as a laugh line.

The scenery of wind-and water-eroded mesas and stone archways is lovely, but the voice performances are largely inert and unremarkable. Other than the risky shenanigans of the PALs, which ought to give any parent pause, so is the film. 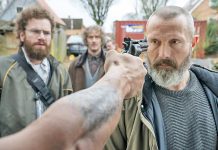