THE WASHINGTON POST – What would you do if a stranger with just a few months to live asked you to fulfill an urgent if admittedly arduous wish? The question may sound like the start of a fairy tale or a segment from reality TV, but it was just such a request in real life that set in motion the affecting story told by Emmy Award-winning CBS Sunday Morning news correspondent Martha Teichner in her memoir, When Harry Met Minnie: A True Story of Love and Friendship.

Teichner’s main themes are sure to warm readers: the steadfast devotion between dogs and their owners, and the essential role friendship plays in sustaining both humans and their beloved pets, however stormy the season, and perhaps especially during the pandemic season we continue to live through.

Adding to the book’s allure is the nostalgia of its pre-pandemic setting, the story unfolding in a Manhattan still bustling at full speed. Cut to a late-July weekend in 2016 and the aromas wafting from the cornucopia of produce stands in Union Square’s popular farmers market, where Teichner and her petite all-white bull terrier, Minnie, run into longtime dog-walking acquaintances Stephen Miller Siegel and his large golden retriever, Teddy. As they catch up Teichner laments the recent death of Goose, her other, older male bull terrier whose loss had left both her and Minnie bereft. Should she adopt another companion for Minnie, she muses out loud?

That’s when Stephen pops the question.

His friend Carol was desperate, he began. She was dying of liver cancer most likely caused by exposure to the toxic fumes and dust that had enveloped her apartment after the destruction of the nearby twin towers on 9/11. But what consumed her was not her own health but her worry about what would happen to her aging, ailing bull terrier, Harry. “Would you take him?” Stephen impulsively asks on his friend’s behalf. 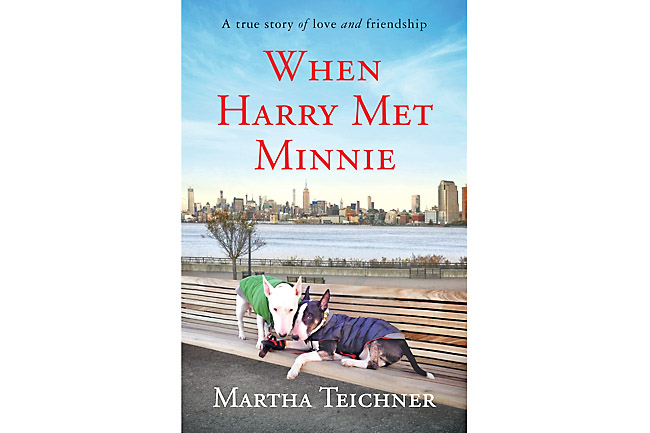 Startled and uncertain, Teichner takes in the proposal and answers with a solid maybe. She does, however, agree to meet Harry and his owner, who turns out to be Carol Fertig, a notable interior designer, artist and fashion stylist.

At their first meeting, Teichner warms immediately to both Harry and Carol; on a less-promising note, Minnie seems indifferent to Harry. To her credit, Carol openly admits that Harry is a “money pit”, with a long and pricey daily prescription list for his arthritis, chronic colitis, cracked paw pads and a range of obsessive-compulsive behaviours. She offers to teach Teichner the exacting steps involved in the time-consuming preparation for administering the meds.

Unsurprisingly, Teichner asks herself, “Who in their right mind would look at Harry’s list of pros and cons and think he’d be a good candidate for adoption?” But she already knows the answer: “Only a bull terrier lover,” she concluded.

Ah, the bull terrier – a breed Teichner describes as “funny looking” in appearance, with “egg-shaped heads, slitty eyes and pointy ears”, and in temperament “opinionated, exuberant, stubborn, extremely silly, and loving”. But what did it say about their owners, Teichner wonders, that everyone she’d ever met confessed to liking the fact that “these animals are subversive by nature”?

As the pets and their owners continue to meet, Teichner continues to waver between her impulse to say yes and the understandable hesitation to take on the hefty concerns Harry brings with him. But even before Minnie and Harry start flirting with each other, and Carol and Teichner begin to forge their own friendship, there’s never a real question about which side Teichner will come down on. Nor do you need to be a bull terrier fan – or even a pet lover – to understand why. That’s because Teichner presents the process by which the sentiments of love and attachment spring up and make themselves felt as being part of a natural progression, common to us all, regardless of which species we, or the objects of our devotion, belong to.

Teichner brings an enjoyably light (though sometimes too cutesy) touch to scenes focussed on these developing relationships. She also vividly details professional assignments ranging from Middle East war zones to postings to South Africa and London and now New York. Her frequent travel schedule in pursuit of the next story and then the next has been undeniably exciting, but her growing closeness to Carol and Harry also leads her to ponder the toll that this often-unpredictable lifestyle had taken on her ability to maintain long-term friendships. Now it would not be her work schedule but Carol’s imminent death that would limit the duration of their bond.

As Carol’s energy flags, the book’s mood grows poignant. In time, Teichner joins Carol’s other good friends to share a 24/7 watch over her during her final days.

Carol’s death leaves a hole in the world, but Harry does have Minnie, and they and Teichner all have each other, at least for the time being. From Carol and Harry, Teichner has learned that we all have the capacity to create and build new friendships and attachments at whatever age or stage of life. That such rewards are possible is the inspirational lesson for all the characters in – and readers of – this touching saga.