THE WASHINGTON POST – There is a perfect little joke at the start of the closing credits for Chicken Police – Paint it RED! It would be rash of me to give away the punchline – it’s a slight thing – but it so thoroughly fits the spirit of what came before that it made me chuckle. Usually, I get fidgety during credit sequences, but not here. I was pleased to look at photographs of the people who created this love letter to the noir genre that made me lol many, many times.

Chicken Police is a mash-up of classic noir such as The Big Sleep and Internet culture. In an interview with the web site bg4ghub, the game’s writer/director Bánk Varga said the seed for the project arose from a YouTube video “where two real roosters provide justice in someone’s backyard”. There is something inherently meme-worthy about the game’s signature sight of a rooster decked out in a necktie and a trench coat. It gives added zest to observations such as: “She had a bygone look in her eyes, older than this ancient building and perhaps the whole city itself. Or maybe I’m just inebriated. But she was the first womanly thing in place for a long time, so I had to give her a chance.”

Santino ‘Sonny’ Featherland utters those lines at the beginning of the game after a mysterious lady appears in his less-than-tidy office. On suspension from the Clawville Police Department, Sonny has been getting by as a private detective operating out of a hotel room. His New Year’s night becomes interesting after Deborah Ibaneza, an alluring impala, hires him to look into a job for her employer, Natasha Catzenko, a nightclub owner. Widely considered the most desirable woman in the city, Catzenko has been the recipient of threatening messages that touch on a secret from her past. Although Sonny has been counting down the days until his retirement, he decides to accept the case.

With the help of Sonny’s ex-partner, Marty MacChicken, a gun-loving agitator with keen intuition, the Chicken Police delve into Clawville’s demimonde. The case takes them to the workplaces of informants, a high-end establishment, the office of a shady medical professional and the home of the city’s most notorious gangster.

Chicken Police is studded with a few basic minigames that task players with things like tracing the knots of a rope to make a quick escape or plucking off targets at a shooting range. These distractions amount to little more than filler. The real amusement simply comes from chatting up the menagerie of anthropomorphic animals who are generally some combination of jaded, guarded and broken.

Flipping through the screenshots I took of the game, I laughed again when I saw Mullen, an old beaver who runs the city’s most venerable newsstand, verbally jab Marty with the compliment: “Anyway, you look good. You’re in good shape. You look more like a turkey than a rooster, if you ask me.”

Naturally, over the course of his investigation, Sonny interrogates suspects. During these episodes players are given a small range of questions to choose from and are graded at the end of the interrogation on the pertinence of their choices. Ultimately, these conversations lead to low-stakes investigation scenes where players must try to draw connections between clues and suspects.

The game’s point-and-click puzzles are basically speed bumps between its dialogue chat boxes which, all together, works in its favour. Kerry Shale, who voices Sonny, delivers an outstanding Humphrey Bogart impersonation. Shale is given plenty of good zingers to work with and the rest of the voice cast also make the residents of Clawville endearing.

In my tiny pantheon of visual novel/adventure games, Chicken Police – Paint it RED! has a spot. 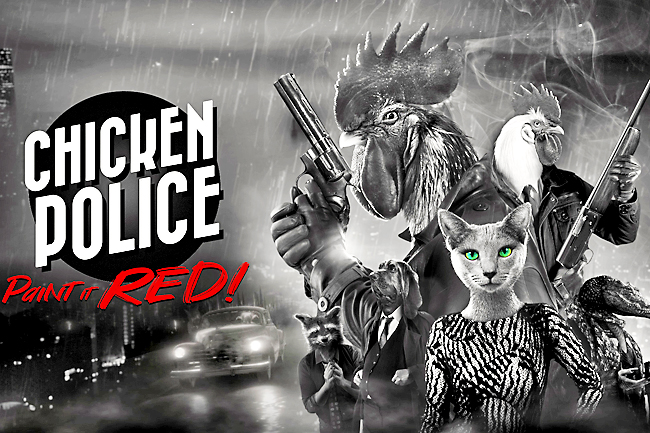