THE WASHINGTON POST – Today, work time is scrambled for many. Employees, especially in the retail and service industries, may not get to work eight hours every day, even if they want to. Having shifts cut or extended in the middle of the workday is the norm. Schedules in the traditional sense are increasingly a thing of the past and are instead often dictated by algorithms, which can result in wonky hours, with employees sometimes given two hours of work one day and eight the next. All of this makes it challenging to plan a life – or receive a reasonably balanced paycheque that can reliably pay the bills. The loss of agency over work time is a large part of what is addressed in a new book by Jamie K McCallum Worked Over: How Round-the-Clock Work Is Killing the American Dream.

McCallum argues that labour’s next big battle may be over not wages but time. Time is an overlooked working condition. It takes on many forms, from retail workers fighting for fair scheduling to gig workers who must be “always on” to the pace of work that industrial laborers must contend with. Further complicating matters, having stable employment is often tied to receiving vital services such as healthcare. In a time when jobs can be hard to come by – let alone keep – it is too easy to fall through our flimsy social safety net.

An academic, professor of sociology and author of several other books about labour, McCallum takes a cue from Marx and argues that we should work less – and slowly lift our dependence on jobs for social services. “We should redesign our economy so that trading most of our waking hours for money is not the only pathway to a dignified life,” he writes.

As McCallum explains, those who control labour control time. In his reckoning, time is not money but a commodity in its own right. Ultimately, it is linked to something more important than mere cash: power. Often, in a workplace, it is the manager who holds that power, setting the hours and the pace of work.

But today, the “manager” does not even have to be a person; it could be one of the technological tools that falls under the umbrella of algorithmic management. That could, for example, mean a scheduling algorithm in a retail store slotting employees into a string of “clopening” shifts – in which a worker performs both the closing and opening shifts of a business, making it hard to maintain a life outside the workplace. (Staffing is increasingly given over to algorithms at Walmart, Target and other retail giants.) Such capricious tools can also be cruel: At a union laundromat at Disneyland, for example, employees were punished when they came in under quota after an automated productivity tracker was installed – what they came to call “the electronic whip”. 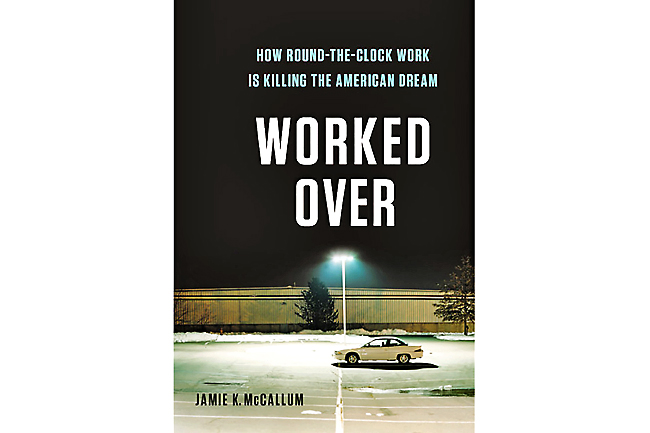 McCallum presents some ideas that could help us get our time back.

One is flexible work arrangements, which have also been called job sharing. For example, when times are bad, employers and employees could agree to, say, cut workers’ days to four per week instead of laying off some co-workers. That way, people keep their jobs and the economic losses are distributed more widely. Flexible work arrangements are nothing new – they go back to the fight to win the eight-hour day. But today they’re more popular than ever; after the Great Recession, job-sharing claims multiplied tenfold, according to McCallum.

McCallum also proposes a “universal basic services” platform, which would provide free access to healthcare, childcare, transportation, shelter and more. The goal is to separate these vital services from work. If someone loses their job – or cannot currently work – that does not mean they should not be able to care for their family or themselves. Moreover, guaranteeing things like food, shelter and healthcare provides another opportunity for people to work less, since their basics are covered.

Next comes Medicare-for-all, which McCallum advocates because healthcare is tied to work time for about half of employees, with 49 per cent of Americans getting insurance coverage through their employers. With guaranteed healthcare, employees could work shorter hours or go part-time and not lose their coverage. In short, they would be freed in one more way from having an essential benefit linked to how long they work.

This points to McCallum’s central goal, which is to reduce working hours. He advocates a movement to shrink our time on the clock while reducing pay barely or not at all, although he does not quite explain how that would work. The ideal is not a country that hardly works, but one where employees work less and have more control over their working time.

Do McCallum’s ideas have enough fuel to fly? Maybe some, but others not so much. The universal basic services proposal, for example, seems to rely on a socialist government that we don’t have. As for reducing working hours, it would be, he admits, a long and difficult struggle requiring much solidarity among working Americans who have not yet been radicalised to the cause. It is a delicious promise, but whether American workers – battered, politically polarised and out of work in great numbers – can take on a fight of this nature at this moment is doubtful. Still, workers of the country need bold ideas like those McCallum offers.