The Society for the Management of Autism Related issues in Training, Education and Resources (SMARTER) Brunei Darusalam expanded the SMARTER Brunei Bistro and Café, BJAK (Brining Joy, Aspirations and Kindness) Café, with a second branch at the Anggerek DEsa Swimming Pool.

The event began with the recitation of Surah Al-Fatihah and Doa, followed by a welcoming speech by SMARTER Brunei Acting President Pengiran Zamri bin Pengiran Haji Bujang who highlighted that this will be the first opportunity for SMARTER Brunei’s Adults with autism to work in a café and experience real employment to earn a basic income and ultimately lead a life with dignity.

“Today, we are able to witness that with the right support, our Adults with autism indeed can be contributing, holistic, interdependent, productive members of society,” said the Acting President. “Our café will not only showcase the awareness to the community for autism, but we hope it will be the driving force of acceptance for all individuals with autism.”

The acting president added that this is only the first phase of what they plan to do with the café as they discovered operating a café was not an easy feat and funding has been the biggest nemesis, but in SMARTER Brunei, they believe they can make work as long as they are willing to put in the effort.

SMARTER Brunei will be moving in three phases to make the space the café of their dreams, said the acting president, where the first phase is solely for traffic market research, trials and errors, and testing their menu with their target audience. They hope to move into the next phase within three to six months into the start of the operation.

The acting president also expressed hopes for more collaborations between SMARTER Brunei and the Ministry of Culture, Youth and Sports (MCYS) to combat the stigma surrounding individuals with Autism.

This was followed by a speech by the guest of honour who reminisced on the expression that was always shared by the late Malai Abdullah bin Malai Othman which was the three A’s: awareness, acceptance and action.

“He often stressed that although awareness on autism is imperative, what is more important is the need to work towards acceptance and action to take steps in empowering SMARTER citizens, as well as other disabled people, so that they do not feel excluded or left behind in national development efforts,” said the minister.

Major General (Rtd) Dato Paduka Seri Haji Aminuddin Ihsan also said hard work needs to be put in through a whole-of-nation approach to ensure acceptance and action for special individuals are on the level it needs to be on through a plan of action. He added that the MCYS will always support the cause as the plan of action needs to be realised.

“It is our role, desire and expectation for the plan of action to be realised,” he said. “We will work together as we are all the driving force for the three A’s to be realised within the society.”

A ribbon cutting ceremony was then carried out to officially launch the SMARTER Brunei BJAK Café, along with a tour.

The aim of the project is to Generate Opportunity for Adult Life for Adults with autism (GOALS for AWA) by providing opportunity for employability and independent living.

The new branch will be the first autism café that employs 100 per cent individuals with autism to operate the establishment.

SMARTER Brunei’s mission is to ensure that “no one will be left behind; every individual will have employment”. 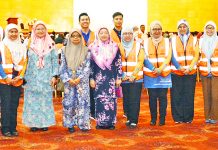 All set for Phase 3 of census 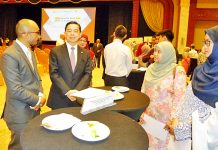 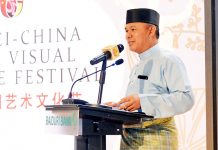 Role of culture even more relevant in COVID times