Brunei Darussalam has been actively nurturing and producing young talents in combat sports over the years, as is notably evident with the dedicated kids’ programmes in various clubs and academies to represent the country in the future, especially at the regional and international level.

The country has witnessed relative success in recent times, particularly in Brazilian Jiu-jitsu (BJJ), which is highlighted by the podium finishes and medals attained by local competitors.

As the sport has grown in popularity, Brunei has welcomed young talent Ahmad Faris Al-Bahzi bin Haji Ahmad Farhan, who has performed exceptionally well with 24 victories under his belt.

Of the 24 wins impressively against international counterparts, 17 have come from submission while the remaining seven were by way of points.

The 10-year-old’s young career began when he first signed up for a free trial, where he was introduced to boxing, BJJ and mixed martial Arts (MMA) classes for kids, before eventually discovering his passion in BJJ.

His father Haji Ahmad Farhan said, “The story behind enrolling him into the martial arts class is because he watched (too much) WWE and Ip Man movies. From Ip Man movies he came across Bruce Lee and kept on digging through Bruce Lee’s movies and tried to imitative his moves. 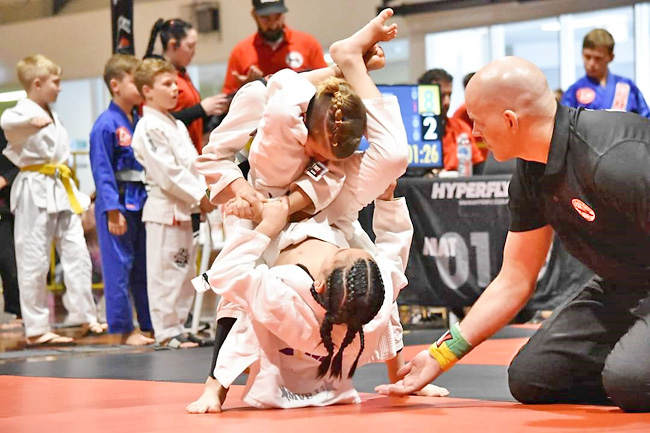 “He did it to his little brother, so my wife and I thought it is dangerous for them both. It would be safe if he can have somewhere and learn the skills in a proper way.

“Luckily, there’s a martial arts academy close to our house and we enrolled him there.”

Ahmad Faris’ sudden interest led him to join Cadoo Martial Arts in April 2021 for two months before moving to Atos Mota-Vation BJJ since the former was relocated.

According to his parents, Ahmad Faris has developed not only a number of techniques but also in terms of his competitiveness, mental strength and emotions.

Ahmad Faris’ coaches and mentors have also been very supportive in his journey and are willing to spend extra classes in preparing him before each competition.

His main influences also include the likes of MMA fighters Khabib Nurmagomedov, Charles Oliveira and, specific to BJJ, Andre Galvao where he spent time watching videos of them.

He has been competing at state and interstate level in Australia mainly in Queensland and New South Wales.

The young competitor, who has held a grey belt since October, has been active in the competition circuit, with the BJJ Spring Australian Open 2022, QBJJC Brisbane Open 2022 and ABJCC Gold Coast Open 2022 among some of his meets this year.

While Ahmad Faris’ journey seemed to enjoy instant progress with his medal collection reaching double figures, his start in a competitive surrounding actually began in defeat.

“There were bitter memories on his first competition where he lost both GI and No GI. That didn’t stop him from joining competitions, but instead that is the point where he built his momentum to fast track his development and achievement,” said his father.

“He won his first medal in the second competition he joined, three weeks after the first competition. It boosted his confidence and hunger in chasing his dreams.

“Now, he is showing progress in managing his frustrations and processing his feelings.”

Outside of BJJ, Ahmad Faris’ personal interests include playing football, going fishing and being creative on whatever he can get his hands on, as well as helping his mother Harliza Manaf in the kitchen.

Ahmad Faris is an active and brave kid and loves to explore new things and activities.

As his mother shared, “He believes that he can achieve his dream to be a professional in combat sports.

“He’s got a big heart in this game and with the spirit of never giving up is the value that he holds, which makes him a consistent competitor. He is very keen to learn and drill every day.”

She also expressed hopes that the younger generation in Brunei would take the opportunity to learn BJJ and other forms of combat sports, not only for self-defence but also to consider it as a path for their career.