THE WASHINGTON POST – The first time I made the creamy almond sauce in the recipe below, I was practically giddy with excitement – so sumptuously rich and tasty, and it was easy to make and healthful, too – score!

I discovered the sauce in cookbook author Nik Sharma’s excellent book The Flavor Equation, where he pairs it with lamb koftas. The aromatic, seasoned meatballs smothered in the almond sauce were heavenly, and I’m looking forward to making that dish again, but I couldn’t stop thinking about the bazillion different ways I wanted to use the sauce itself – a miraculous mix of sauteed seasonings, almond flour, water and a splash of lemon juice.

Since the sauce is so protein-rich, it seemed a prime way to level up a vegetarian meal, and this recipe is proof of that concept.

It starts with a blend of dried spices, echoing the flavours in Sharma’s original recipe – turmeric, coriander, chili powder, garlic and ginger.

You use one half of the spice mix to toss with cauliflower, carrots and bell peppers before roasting them, and the other half for the sauce, where the mix is warmed in a skillet with a sauteed onion and the almond flour, to activate their flavours. Then you add water and watch the transformation as the sauce comes to a boil. 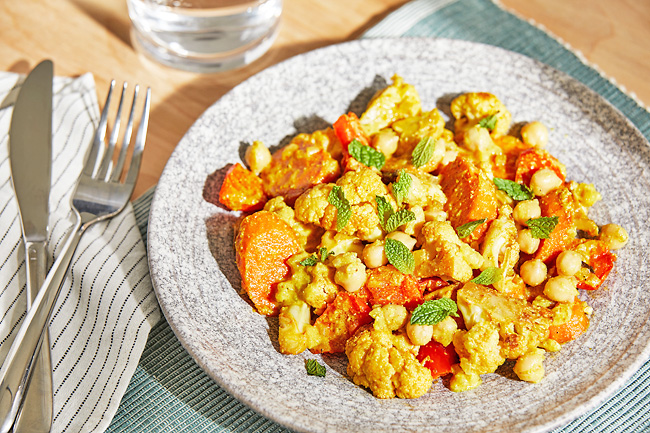 As Sharma explains in his book, the combination of carbohydrate and fibre in the finely ground almonds creates a beautifully thick, creamy texture.

He recommends using blanched almond flour for a smoother result, because the nut’s skins are removed in the blanching process.

For this recipe, once the sauce is done, you add the roasted vegetables to the skillet, along with a can of chickpeas and a splash of lemon juice, and cook for a few minutes, letting everything come together.

The sauce for this dish, inspired by a recipe in The Flavor Equation, by Nik Sharma, is a brilliant mix of aromatic spices, almond flour, water and a splash of lemon juice – and comes together easily to form a rich, creamy gravy.

To save on time, prep the ingredients that follow the olive oil while the vegetables are roasting.

Make Ahead: The vegetables can be roasted up to three days in advance.

Storage Notes: Refrigerate for up to four days.

Position a rack in the middle of the oven and preheat to 425 degrees Fahrenheit. In a small bowl, whisk together the coriander, turmeric, chili powder, ginger, garlic, salt and pepper until combined.

In a large bowl, combine the cauliflower, carrots and bell pepper. Sprinkle with about half of the spice mixture, drizzle with two tablespoons of the oil and toss to coat evenly.

Transfer the vegetables to a large, rimmed baking sheet and roast for 20 to 22 minutes, or until the vegetables are firm-tender and lightly browned in spots, stirring once or twice while they cook.

When the vegetables are about five minutes away from being done, in a large, deep skillet over medium heat, heat the remaining two tablespoons of oil until shimmering.

Add the onion and cook, stirring, until translucent, about five minutes.

Add the remaining spice mixture and the almond flour and cook, stirring, until fragrant, about one minute.

Stir in the water, increase the heat to high and bring to a boil. Stir in the roasted vegetables and the chickpeas and return the mixture to a boil.

Add more water, if needed, quarter-cup at a time, to maintain a saucy consistency.

Reduce the heat to medium-low, cover and simmer, stirring occasionally, until the vegetables are tender, three to five minutes.

Stir in the lemon juice and season to taste with additional salt, if desired.

Divide among shallow bowls, garnish with the mint and serve.