A breath of fresh air for Umrah pilgrims

Following the easing of restrictions for entering and exiting Brunei Darussalam via air travel that was announced during the daily press conference recently, members of the public have began to travel to various destinations.

While some chose countries that they have been wanting to visit after a travel hiatus of nearly three years, many also opted to register for the Umrah packages that have been offered by several registered travel agencies in the country.

The Bulletin recently had the opportunity to get insights from the Managing Director of Al-Hijrah Travel and Tours Haji Shamsul Baharin bin Haji Abdul Rahman on the process, requirements as well as the procedure to bring the Sultanate’s Umrah pilgrims to the holy cities of Madinah and Makkah.

“Alhamdullillah, the recent announcement of easing of travel restrictions helped revive the tourism industry after facing hardships and challenges to keep the business going,” he said.

“This year in April, we managed to bring our first Umrah pilgrims to Madinah and Makkah.”

Prior to their departure, he added, Al-Hijrah made several arrangements both in the Sultanate and the Kingdom of Saudi Arabia as well as the transiting countries. 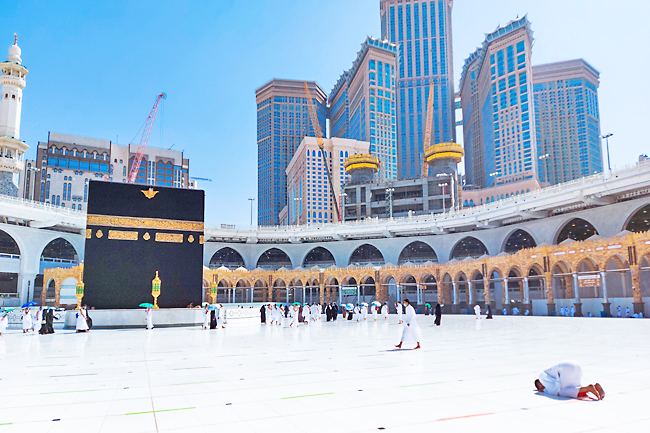 “The arrangements include acknowledging the policies and regulations that have been set by our government before travelling abroad, including making online application to the Prime Minister’s Office (PMO) and informing the Ministry of Foreign Affairs (MoFA). The ministry will notify the General Consul in Jeddah on itineraries that will be carried out by our ’s Umrah pilgrims.

“Once the approval is obtained, the pilgrims need to have travel insurance, particularly that covers COVID-19. The travel insurance is needed in case the Umrah pilgrims experience unexpected incidents or situations such as transmitting or being infected by COVID-19. It would help ease their journey if they are insured. This procedure is one of the efforts taken by the government to protect the citizens of the country while travelling abroad.”

When asked how Al-Hijrah Travel and Tours tried to convince their customers to sign up for the Umrah package, the managing director said at first they were uncertain as the world is still battling with the pandemic. “However, we did not expect to receive such an overwhelming response from our customers, some are just ready to go,” he shared.

“At the same time, we also advised the pilgrims to look after their health and hygiene while following the standard operating procedures (SOPs) and guidelines that have been stated by the government prior to travelling abroad and entering the country.”

“We also emphasise for the pilgrims to wear face mask even though it is not required in some countries, as this is to protect our pilgrims. We also reminded them on self-hygiene; washing their hands often or using hand sanitiser after being in crowded places. We advise them to clean or to shower as well as change their attires once they are back in their hotel rooms.”

Another requirement that needs to be fulfilled by the Umrah pilgrims is to perform the antigen rapid test (ART). “Even though some do not require the polymerase chain reaction (PCR) test, but as part of the safety measures, we advised and encouraged our pilgrims to take ART test before departure and before arriving to Brunei Darussalam.

“We also explained to pilgrims to fill in the travel forms that are required by the country that they are transiting in as well as the country of destination. They also need to download an application similar to BruHealth so that their vaccination and health status are always updated.

“Alhamdulillah, during our journey, all officers, managements as well as the pilgrims had negative ART results,” he added.