A book on leadership that offers real leaders

THE WASHINGTON POST – From Plato to David Petraeus, distinguished writers have tried to uncover the essential principles and behaviours of successful leaders. They have emphasised toughness and sensitivity, thundering eloquence and quiet contemplation, and, most recently, devotion to a True North and “emotional intelligence”. Leadership often appears to be everything and nothing at the same time – a mix of trite advice, contradictory analysis and ponderously obvious observation. Has any successful leader ever used any of the books on leadership?

Most leaders pay more attention to experience – their own and that of others, learned from reading history. The founders of the United States (US) thought deeply about their grievances with the British Empire, and they immersed themselves in the republican alternatives from ancient Rome and Renaissance Italy. They had rich historical inspirations but few theories. The same could be said for the leaders most venerated in the last century: Franklin D Roosevelt, Winston Churchill and Martin Luther King Jr, among others. Knowledge of their predecessors’ successes and failures, not abstract wisdom about leadership, drove them to new heights after many failures of their own.

David Gergen worked for four American presidents – Richard M Nixon, Gerald Ford, Ronald Reagan and Bill Clinton – and he witnessed their struggles with leadership up close. In his remarkable new book, Hearts Touched With Fire: How Great Leaders Are Made, he rejected universal models for leadership. His heroes come in all shapes and sizes, and include John F Kennedy, George HW Bush, John Lewis, Ruth Bader Ginsburg, Malala Yousafzai and Greta Thunberg.

All of these figures followed their own paths, succeeding in very different environments.

Gergen built his narrative around their varied and trying experiences rather than abstract principles. He provided numerous stories, often mini-biographies, that can help an aspiring leader find her own relevant examples without requiring a perfect fit. The leadership espoused by Gergen is in the hands of the reader – young readers, he hopes – not a set of timeless lessons. His book is more of an alluring kaleidoscope than a sermon, research paper or how-to. 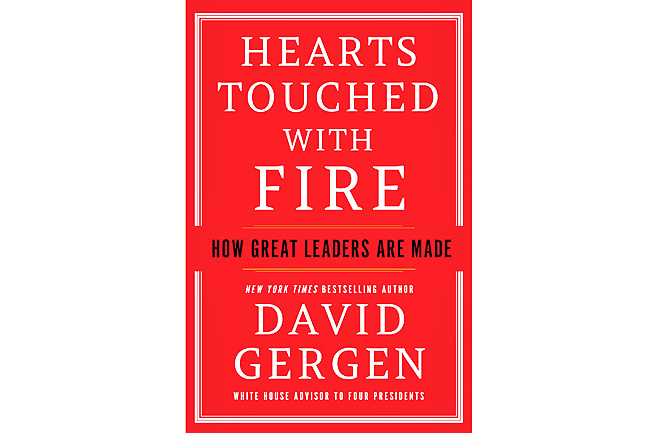 Gergen began with what he calls the “inner journey”. This involves personal preparation to work with others to achieve what the author calls “stretch goals”. Individuals make themselves into leaders, as Gergen described, by finding their passions and nurturing an “integrated life” that allows consistent pursuit of purpose within a sustainable setting. The inner journey necessarily involves setbacks and “crucibles” of challenge. Leaders never master themselves or their environment, but they learn to convert adversities into opportunities for self-improvement. Gergen is particularly compelling in his account of the inner journey of Katharine Graham, former publisher of The Washington Post, who painfully turned some of the most difficult days for herself and the newspaper into notable achievements covering Watergate, the Vietnam War and other consequential topics. The inner journey, as elucidated by Gergen, succeeds when the rising leader finds her balance – her sea legs – for rough waters.

The “outer journey” involves changing others, including bosses, voters and even adversaries. Leadership is always a team sport, even in dictatorships, because you need help from others to get things done. “In most organisations,” Gergen wrote, “the hard part isn’t coming up with ideas but transforming those ideas into reality.” He showcased James Baker’s time as President Ronald Reagan’s chief of staff (and Gergen’s boss). Baker quietly and consistently cultivated strong ties with members of Congress, especially powerful figures across the aisle.

He also worked closely with reporters to help them get the facts and cover the administration fairly and fully. Baker built trust with diverse stakeholders and made himself indispensable; he did not bully, prevaricate or seek blind loyalty. He figured out how to collaborate with contradictory personalities in a highly politicised atmosphere. Gergen recounted Baker’s intense preparation, careful thinking and unbending determination to get the job done for the president and the country.

In some ways, Baker is the most important figure in Gergen’s fascinating, multilayered book. As other biographers – particularly Peter Baker and Susan Glasser – have recounted, Baker came to Washington as an elite Houston lawyer, with a distinguished family background, to help lead the country. He was initially a Democrat but devoted his prodigious energies to running campaigns, the White House and foreign policy for Republicans he believed in. He worked to solve difficult problems and get big things done: tax relief and economic growth, defending the world’s oil supply, and ending the Cold War peacefully. And he did all these things by building bridges across partisan divides. It is impossible to imagine Baker trolling his opponents on Twitter.

Gergen wrote Hearts Touched With Fire to bring figures like Baker to life for young men and women concerned about the future of the United States and the world. He does not want them to copy Baker, or any of the other subjects in the book, but to draw inspiration to solve difficult problems and get big things done again. He explains that much of the “death and destruction” of the last two decades “could have been avoided if we had paid attention and acted on early signs of trouble”. And he declares that young people must come together to do that.

They will obviously need new leaders, with different experiences and outlooks from their predecessors. That is the main point of this inspiring and useful book – to help a new generation reimagine leadership for our troubled times. Surveying how others have navigated the challenges of the past, young men and women can deepen their understanding of themselves, their world and their options. Few books have so much to offer readers contemplating whether to enter the arena. We should hope they heed Gergen’s compelling call to action.