THE WASHINGTON POST – Book after book, the famous alchemist Paulo Coelho has transmuted leaden cliches into publishing gold. For decades, his volumes of inspirational Cheez-Its have proven irresistible to self-help snackers around the world. With more than 300 million copies in print, he’s one of the bestselling authors alive.

The Archer was originally released in 2003 as an e-book under the Portuguese title, O caminho do arco (The Way of the Bow). Now, with the Brazilian author’s brand more valuable than ever, this didactic little handbook is being released in an elegant gift edition for fans in the United States (US).

The setting of The Archer is the world of parables that we might think of as Meaningville, an abstract realm with muted colours and a fuzzy periphery signalling Lessons are about to be unfurled. The plot, such as it is, troubles only a few introductory pages: A stranger arrives and reveals that the town carpenter, Tetsuya, is in fact “the best archer in the country”. Although Tetsuya hung up his bow years ago and has since lived in humble anonymity, the stranger challenges him to a shooting contest. The retired master reluctantly agrees and quickly bests the stranger with a display of miraculous archery. (Spoiler alert: A peach is ruined.) “You showed him,” a boy shouted. “You really are the best!”

Having heard Tetsuya speak of “the way of the bow”, the boy is intrigued. “Can you

teach me?” There has never been a question freighted with less suspense. 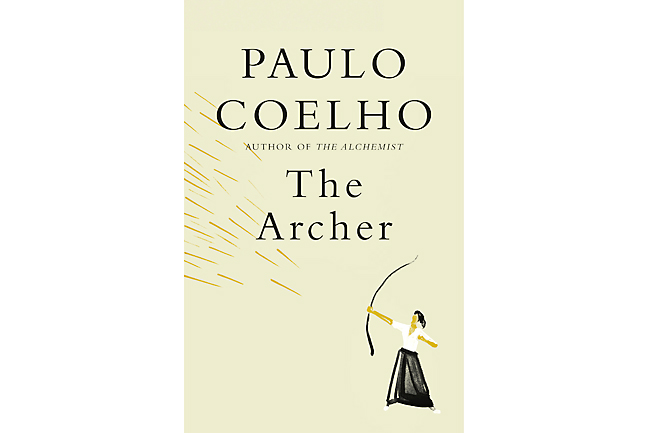 The remainder of the novel unfolds as a series of motivational aphorisms that grind away on archery as a metaphor for a life well lived. But the conceit quickly gives way to redundancy and triteness, and we’re left trying to shake the image of Stephen Covey wearing a leather tunic with a feather in his cap.

The Archer contains many blank pages and many full-page illustrations by German artist Christoph Niemann, as though to give readers quiet space in which to digest such wisdom as, “Trust your intuition and pay no attention to what anyone else may say.”

The whole book evinces the depth of Melania Trump’s ‘Be Best’ programme. Which suggests at least part of the problem: The superficiality of The Archer is exacerbated by its deadening style. A sentence with a shaft this crooked should never have left the quiver: “Once the arrow has gone, it will not come back, so it is better to interrupt a shot, because the movements that led up to it were not sufficiently precise and correct, than to act carelessly, simply because the bow was fully drawn and the target was waiting.”

I have no idea what that arrow was aiming for, but somehow it seems to have impaled Jonathan Livingston Seagull.

The oracular urge runs hot through Coelho’s lines but rarely generates much light. “The mind of the person who made the shot has changed dimensions,” the archer said. “It is now in touch with the whole universe.” That phrase may imitate the majestic gait of profundity, but it’s really just a colourful balloon animal. And so many passages peddle nonsense, like the archer’s claim that “both sea and snow are deep and know their own qualities.” No. That’s not factually or poetically true.

At this point, I would like it very much.

My only relief came from moments of unintended humour, such as when the book warns, like some Victorian sermon against onanism: “Do not dissipate your energies. That way, you will be able to shoot many arrows without tiring.”

You may think I’m being too hard on this slim volume, but I’ve started to worry that Coelho and his ilk aren’t nearly as harmless as we imagine. The writers of aphoristic treacle are no more innocent than the purveyors of sugary drinks. Critics are advised not to be so snobby or to take solace in the assumption that these books will eventually lead readers to more substantive works. But what if, instead, trite literature dulls the senses and makes one less able to appreciate quality, complexity, real insight? That is, what if books by Coelho, Mitch Albom and others don’t satisfy a market so much as create it, enfeebling their readers while purporting to strengthen them with revelations?

In his famous jeremiad against hackneyed political rhetoric, Orwell pointed to a pernicious cycle. Language, he wrote, “becomes ugly and inaccurate because our thoughts are foolish, but the slovenliness of our language makes it easier for us to have foolish thoughts”.

We suffer a similar fate when we’re awash in the orthodoxy of self-help. The degradation of inspirational language generates synthetic optimism and flimsy pride, the compost in which cynicism eventually takes root. Worse, a diet heavy in sweet aphorisms makes discerning reflections on life taste all the more unappetising. That’s perilous, because into every life fall challenges that require actual wisdom and hard-won insight. Fortune cookies bound into lovely little books won’t get us through the dark night of the soul.

In other words, the book you are reading is also reading you. So watch out.