THE WASHINGTON POST – If you’re at all concerned about food waste, you know to pay attention to how long you store ingredients. Thankfully, there’s an easy way to extend the shelf life of many common items: the freezer.

Plenty of ingredients that are susceptible to spoilage or diminishing returns come in amounts that are hard to use quickly. So let the freezer help you, well, keep them frozen in time. Newer reusable zip-top bags made of silicone are great for packing food, though I also employ disposable bags over and over again. Reusable airtight containers and jars are another option, and here’s where you can give a second life to the inevitable pile of plastic takeout containers you may have amassed over the course of the pandemic.

Below are some of my top picks for what you should consider moving into cold storage. And before I hear the inevitable concerns about space (I know this well!), keep in mind I’m not saying everyone should have every single one of these items. Pick the ingredients that most appeal to your style of cooking, and evaluate what you are, or aren’t, likely to use in a reasonable period. Maybe you just pack up half the bag of flour or nuts. Maybe you only really have the room or interest in yeast. Whatever works. Let this advice help guide you to your ideal freezer.

It’s been years since I bought individual packets of yeast. Larger jars and packages are more economical, and my favourite instant yeast, SAF Red, is most often sold in one-pound bags. I transfer that to an airtight container for long-term storage, while my jar of active dry yeast goes straight into the freezer. (Transfer to another container if you’re concerned about glass breakage.) King Arthur Baking said yeast can be frozen for at least a year, though I’ve pushed it much longer, probably as long as two. There’s no need to thaw before using. 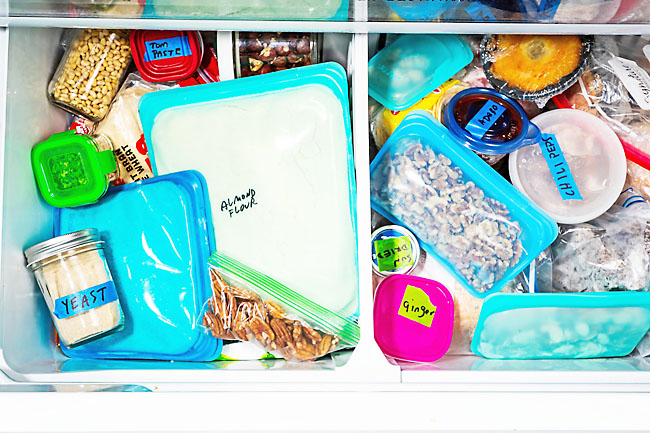 Although I generally prefer tubes of tomato paste, cans are priced cheaper per ounce and are more readily available in some stores. For easy portioning, I like to scoop out one-tablespoon mounds, freeze on a lined baking sheet (a small quarter sheet is ideal for space reasons), then pack into a reusable bag or container. I’ve also taken a similar approach to canned chipotles en adobe (dried and smoked jalapeños packed in a spicy, tangy tomato sauce). You can mince and freeze just the peppers or include some of the sauce, as I tend to do. Silicone ice cube trays are also useful for this type of prep. Most dishes in which you’ll use either will require little to no thawing time on the counter. I’ve kept the little blobs around for what I could call indefinitely.

Shopping for ginger almost always means getting more than you need – and it’s one of the ingredients you may find yourself scrambling for at the last minute. Enter the freezer. Like with tomato paste, I divide the larger roots into a standard ingredient amount, in this case approximately one-inch chunks. You can peel before freezing, but usually I just toss them in as is. Just a few minutes on the counter will be enough time to make it easier to scrape the peel off with a spoon, while keeping the ginger cold enough to work with. I find that frozen ginger is much, much easier to grate and mince. I’ve never needed more than a few months to kill off a stash, but I wouldn’t hesitate to keep ginger in the freezer for at least a year, if not longer.

Anyone who has ever grown peppers at home knows that once the plant really starts going, it can be hard to keep up. Years ago, when faced with a bounty grown by my mother-in-law, I started popping them into the freezer. This has also been helpful when I visit my local Asian or Indian markets that only sell chilli peppers in large packages. I don’t bother washing or stemming before freezing them. A quick run under the sink when I pull them out is enough to clean them and just start thawing them enough to allow for chopping. As with ginger, I generally like working with small peppers while still slightly frozen. They will easily last six months to a year, if not longer.

If you’ve ever grabbed nuts out of the pantry and they didn’t taste right, it’s probably because they’ve gone rancid. Ditto nut flours. Nuts are packed with fatty oils, which are prone to going off, especially in warmer temperatures. According to this handy guide from the University of California Agriculture and Natural Resources folks, rancid nuts are not unsafe, but they aren’t particularly pleasant to eat.

The guide recommends that if you know you won’t be using nuts within a few months, cold storage is best. Refrigeration extends the storage life to a year, the freezer, on average, to two. Frozen, shelled pistachios will last the longest (at least three), followed by walnuts and pecans (at least two), then almonds and chestnuts (at least a year). Shelled nuts are susceptible to picking up flavours and moisture, so store in something clean and airtight.

While refined flour is made from the endosperm of the grain, whole grains include the germ and bran. As the Whole Grains Council explains, the germ contains oils that, as with nuts, can spoil with exposure to heat, humidity and moisture. You can leave whole-grain flours and meals on a cool, dry pantry shelf for one to three months. Any longer than that and you’ll want to try to get them into the freezer, which increases the storage time to two to six months. Intact grains, as opposed to flours or meals that have been milled, will last six months on the shelf and up to a year in the freezer.

I always make room in my freezer for a bag of onion ends and skins, carrot trimmings, kale stems, woody asparagus stalks and more. Keep them from going into the compost by making Scrappy Vegetable Broth, which is my go-to for a meatless soup, stew or sauce base.

From light romance to time travel