The local snooker and billiards community returned to competitive action after a lengthy hiatus due to the coronavirus outbreak following the commencement of the Merce Snooker Championship 2021 at the Merce Snooker Café in Kiulap on Sunday.

Half of the 64 participants from Group ‘A’ and ‘B’ began their quest for supremacy in the preliminary round with familiar faces finally ending the long wait of a tournament.

Sixteen participants from both groups moved closer to a spot in the top eight after winning their opening round matches and will look forward to the next round tomorrow for Group ‘A’ and July 29 for Group ‘B’.

In Group ‘A’, Pengiran Basheer defeated Leo Yong 2-0 with Nuraleem winning by the same score-line against King Leong.

Faisal will also be in the winning bracket after edging Hardeeman 2-1 with Chai Chang Fong following suit after a 2-0 victory over Isyraq Jeffry. 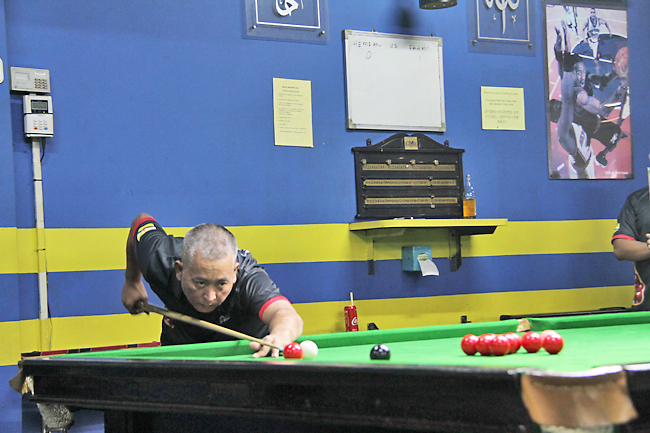 The opening round also saw a battle of snooker personalities between Haji Kamarulzaman and Wong Ru Sheng with the match ending in the favour of the former. Brunei’s pool cueist Lim Wei Kok is also in the hat after a 2-1 victory over Pengiran Sofyuddin with Asrizal and Koh Yaw Boon joining him after wins over Pengiral Rijal and Serabah Abas.

Meanwhile in Group ‘B’, Hemran Jamil sealed his passage to the winner’s match with a 2-1 victory over Fahmi while James Jasmir defeated Yap Teck Chung 2-0.

The late afternoon matches saw Khurram Shahzad begin his campaign with a 2-1 victory over Jimmy Lim while Azim Bakar also secured a spot in the winner’s match after a 2-1 win over Benny Boy.

In the evening matches, Gibson Thian won his match via a walkover while Khairul Anwar, Zairul Nazmi and Alias Rashid all recorded victories at the expense of Md Hanafiee, Faris and Haji Rahman.

The event features a 15-red snooker singles category played in a best-of-three match in the double elimination round.

The single elimination round, which is the quarter-final and semi-final, will be played in a best-of-five frame while the final will be contested in a best-of-seven match.

The quarter-finals and semi-finals will be held on the same day on August 6 with the competition set to reach its conclusion with the final the next day.