61 migrants rescued by freighter off Malta landed on Crete

ATHENS, GREECE (AP) – A group of 61 migrants picked up by a cargo ship from a crippled vessel in the central Mediterranean safely reached Crete hours after a severely ill child on the freighter died while being airlifted to the Greek island, authorities said yesterday.

It was unclear whether these were the same people who had earlier been reported stranded for days without provisions on a leaking fishing boat near Malta, after trying to sail from Lebanon to Italy.

On Tuesday, a Greek navy helicopter had airlifted a four-year-old girl with health problems and her mother off the BBC Pearl freighter, that had rescued the migrants, but the child was pronounced dead upon arrival at a hospital on Crete.

The coast guard said the remaining 33 men, seven women and 21 children disembarked from the Antigua and Barbuda-flagged ship early yesterday at the port of Kali Limenes on southern Crete.

Two were taken to hospital with non-life-threatening health issues, while the rest were temporarily put up in a sports hall in the town of Moires. The migrants told authorities they were Syrians, Lebanese and Palestinians. 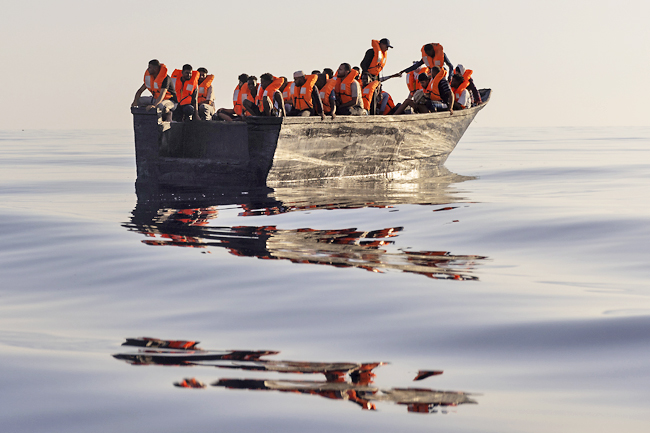 The coast guard said in a statement late on Tuesday that the BBC Pearl had rescued them inside Malta’s search and rescue area.

It said Greece received a request around midday on Tuesday from Maltese authorities, who had been contacted by the cargo ship’s captain, to airlift the mother and child to safety.

The ship then altered course towards Crete to facilitate the airlift, the coast guard statement said.

On Tuesday, activists and relatives of Lebanese and Syrian migrants on a fishing boat taking on water near Malta said they had lost contact with the vessel overnight.

The roughly 60 Lebanese and Syrian migrants on board had told their relatives and volunteer groups by satellite phone earlier that they have been without food, water and baby formula for days.

The vessel had left the northern Lebanese city of Tripoli about 10 days ago for Italy.

There has been an increase in migrants seeking to travel on unsafe boats from Lebanon to Italy, and Greek authorities have performed several rescues in recent weeks.