The victims unwittingly handed over all the details including the Automated Teller Machine (ATM) card’s pin number and e-money login information as well as password to “person-in-charge”.

It was a “lucrative” deal for the poor in the rural areas. Later, they found themselves in hot water when the bank accounts were operated by syndicates for illegal activities including, scams, money laundering and other economic crimes.

Commander of Immigration Division 3 of the Thai Royal Police, Pol Maj Gen Archayon Kraithong said at least 500 mule account holders had fallen prey to scam syndicates in the country since the beginning of this year.

He said a victim would be paid depending on numbers of new account they opened and when the scammers obtain the bank account details, they would disappear.

“When investigations were carried out on scam cases, we found out many locals were hired to open new bank accounts. When we approached them for investigation, they were in shock as they didn’t know the account was meant for illegal activities including scams,” he told Bernama recently.

He added the modus operandi by the syndicates left no trace for investigation in scam cases.

Archayon who is also Thailand’s Action Taskforce for Information Technology Crime Suppression’s (Tactics) secretary added that the public did not understand the consequences and implication of being a mule account holders.

Therefore, he urged the public not to disclose any banking details to strangers to avoid falling into the scam trap.

Archayon said e-money or e-banking was the ‘safest’ tactics for scammers to siphon millions from vulnerable victims.

Previously, he said there were ‘horses’ or withdrawers waiting in front of the ATM machine but now fraudsters need a few clicks to transfer the money.

Using the same modus operandi, he said the scam syndicate would inform the victims that police or court warrant had been issued against them and the victims needed to prove they were innocent by opening a new e-money account.

“Panicked and scared, the victims would follow the instruction. The fraudsters would coach the victims to provide password for monitoring purposes. The victims only lodged reports when they realised they money had disappeared hours later,” he said.

Statistic showed 260.4 million baht had been siphoned by call centre syndicates from December 2017 to May this year and 551 suspects were arrested. 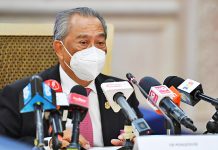