THE WASHINGTON POST – As a four-year-old, Brad Parks was so ravenous for The Monster at the End of This Book that his older brother – facing endless requests to read the story – finally recorded a version on an audio cassette.

For Parks, now an accomplished author, the book was a formative introduction to suspense.

“The fact is,” he said, “I am 46-years-old, I write thrillers for adults, and in some ways all I’ve ever tried to do is replicate The Monster at the End of This Book. There is a monster at the end of all of my novels, and I want you to feel this unbearable compulsion to turn pages and find out what it is.”

Parks is far from the only one to get hooked on the story. The book, featuring Grover from Sesame Street, was published by Little Golden Books in 1971, and 50 years later nearly 13 million copies of various editions have been sold.

“But that Little Golden Book – that classic, the way it first came out – is the one that continues to just sell and sell and sell,” said Mallory Loehr, a senior vice president at Random House who oversees its imprints for young readers. 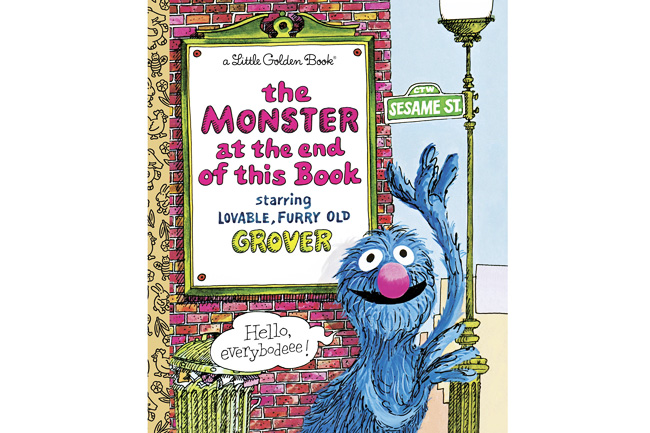 It’s one of the top-10 selling Little Golden Books of all time. A decade-old interactive app version has been downloaded more than half a million times and is among the most popular book apps. Last fall, HBO Max released an animated special based on the book, giving sales another bump.

All of that has made The Monster at the End of This Book an unlikely constant, at a rarefied height, though it still chases the iconic status of picture books such as The Cat in the Hat, Goodnight Moon and Where the Wild Things Are.

And the book’s long tail of influence is out of proportion with its 24 pages and its cardboard cover devoid of medallions. It’s come to be regarded as an evolutionary step in children’s metafiction, nudging further the creation of stories that “demystify bookmaking for children and invite them to sort of get their hands dirty”, said children’s book historian Leonard Marcus.

On the title page, Grover is bored and already peeling the corner of the page to move on. But then, realising what the title said, Grover panics: He’s afraid of monsters, he said. He begins to unravel, pleading with the reader not to turn pages, and attempts to block the way with ropes, planks and bricks. At the end of the book – half-century-old spoiler alert – there is only himself, “lovable, furry old Grover”, a blue monster feeling sheepish about being scared.

The book was written by Jon Stone, one of the creators of Sesame Street. Stone helped bring pioneering puppeteer Jim Henson and songwriter Joe Raposo to the show. He wrote the pilot episode, envisioned the rough-around-the-edges look of the early set and helped create core characters. For more than two decades, he guided the series, variably, as a writer, director and producer. He also helped write the pilot for what would become The
Muppet Show.

“No matter how good your job is, mine is better,” Stone told a Washington Post reporter in 1989.

Likely in late 1970 or early ‘71, during Sesame Street’s second season, Stone boarded a cross-country flight with a yellow legal pad and an anxious mind (he hated flying). By the time the wheels kissed the tarmac in California, his two daughters said, he’d written The Monster at the End of This Book.

Illustrator Michael Smollin, whose expressive style brought the book to life, was a former advertising executive who’d gone on to do illustrations for such publications as TV Guide, Time magazine and a number of Sesame Street books. Among the books, he and Stone made a sequel, Another Monster at the End of This Book (1996), and the clever Grover books Hide and Seek (1976) and Resting Places (1984).

“I remember seeing (the manuscript) and saying, ‘Oh my, this is wonderful,’” said Christopher Cerf, a prolific Sesame Street songwriter who arrived in 1970 to create a division for developing books and other products that might help fund the show. Even at 39 cents apiece, he said, the book’s fast success helped establish publishing as a promising revenue stream for Sesame Street. And it set off a wave of inspiration.

“This is a brilliant idea perfectly executed,” said Mac Barnett, a bestselling children’s book author who romps the wilds of metafiction in the books Chloe and the Lion and How This Book Was Made. “Once you have that title and that ending, you’re like: ‘Alright, here we go!’ And that’s what it feels like to read it, too. It’s just a rocket ship.”

The book is part of a long trajectory in children’s literature – including such contemporary bestsellers as Mo Willems’ Don’t Let the Pigeon Drive the Bus, Herve Tullet’s Press Here and BJ Novak’s The Book With No Pictures – that explores the nature of fiction by playing with form and imbuing the story with self-awareness.

The Monster at the End of This Book landed between two well-known mile markers in that line, said Marcus, the children’s book historian: Crockett Johnson’s 1955 book Harold and the Purple Crayon, in which the character illustrates the story as he goes, and the 1992 book The Stinky Cheese Man and Other Fairly Stupid Tales, a fever-dream sendup of classic stories that leaves no element of bookmaking unspoiled. (The first tale ends abruptly when the book’s table of contents falls into it, squashing the characters.)

Lane Smith, who created that book with Jon Scieszka, said that when he came across Stone’s book in the early 1980s, after art school, “it just entered my bloodstream. It was just an epiphany that you could do this with a book.” For many working in picture books, he said, “it gave us licence to break the fourth wall”.

The Monster at the End of This Book helped popularise such ideas, even if scholars don’t always give it credit. As a TV tie-in and a Little Golden Book, it didn’t necessarily get the attention it deserves, according to Philip Nel, an English professor at Kansas State University who studies metafiction and postmodernism in children’s literature. Those factors might keep a book from being “regarded as art with a capital A”, he said, as opposed to books with original characters, thicker paper and dust jackets.

But the low cost and grocery-aisle availability of the book, along with the instantly recognisable charm of TV’s Grover, primed it for takeoff. Then, an expertly engineered story shot it into orbit.

Not only is Grover addressing the child, but what he’s asking them to do is also empowering and alluringly counterintuitive. “Generally, there’s a set of assumptions: We start at the beginning, we go to the end,” Nel said. “This one, right at the beginning, said, ‘Please don’t go to the end.’ Right away it’s saying: ‘Are you sure you want to do that? Could we maybe not?’”

The storytelling may seem unorthodox, but testing boundaries is a part of daily life for
a preschooler.

“I think that we can mistake metafiction as sort of a highbrow, beard-strokey thing, but actually it’s just rough-and-tumble play with the rules of literature,” said Barnett, the children’s book author. “And kids are eager to engage in that kind of play. It’s what they do all the time.”

What separates this book from “a lot of lifeless copies”, he said, is that “around this really exciting intellectual framework, there’s an emotional core. Grover is afraid in this book. It’s emotion that’s driving us forward”

Stone’s book inspired people outside publishing, too, which surprised him, his daughters say. People mailed him sermons squeezed from the tiny volume, and at least one
doctoral thesis.

“Dad was amazed by how many people connected to the book (on) so many levels,” said his younger daughter, Kate Lucas, a rancher in Wyoming. “I don’t think there was a higher message for adults in there. I really think the interactive part was what he was
getting at.”

“He was not somebody who loved delving deeply into the metacognition of a children’s book,” said her older sister, Polly Stone, a teacher and school librarian in Vermont. “He just wanted it to bring huge joy and learning to the kids.”

And it brought joy to him, too. “He loved it. He loved reading it to kids. He gave it to everybody,” she said. “He was magical with children.”