GUA MUSANG (Bernama) – A 48-year-old burger seller who trekked up a limestone cave opposite the old railway station, died after encountering breathing difficulties.

“Upon reaching the cave peak, the victim experienced breathing difficulties because of fatigue and became unconscious.

“His friends tried to resuscitate him but failed. They then contacted the Fire and rescue Department in Gua Musang for help,” he said.

Anuar said the authorities received the call at 6.21pm and 20 personnel and a medical officer were dispatched to the site. “It took about an hour for the team to get to the peak and the medical officer confirmed that the victim had died.

The victim’s body was then carried to a lower level of the cave after which a rope was used to bring the body down to the ground. The operation ended before midnight.

Meanwhile, the victim’s father, Jusoh Che Musa, 73, said his son had no medical problems, adding that trekking up the cave had become a regular outing for him.

Meanwhile, Gua Musang District Police Chief Superintendent Mohd Taufik Maidin said the victim’s body was sent to Gua Musang Hospital for a post-mortem and had been handed over to the family for burial yesterday. 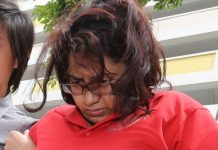