13 feel-good books to brighten your summer

THE WASHINGTON POST – No disrespect meant to the downers of the literary world, but sometimes you just want a book that makes you smile. Here’s a collection of the best feel-good reads of the year so far. They’ll make you laugh, and they might make you cry – but only tears of happiness.

THE HAWK’S WAY BY SY MONTGOMERY

If you’re a bird-lover – or otherwise revel in nature – you’ll appreciate Montgomery’s latest, which clocks in at just under 100 pages. In The Hawk’s Way, she recalls getting to know a four-year-old raptor named Jazz, which led her on a journey to understand the animals.

If a misanthropic octopus sounds like fun, you’ll appreciate Van Pelt’s debut novel. It’s about Tova, a widow who works the night shift at a Washington state aquarium, which keeps her busy after her son’s disappearance three decades ago.

The octopus, named Marcellus, just might hold the keys to unearthing what happened to Tova’s son.

A charming novel with a stunning setting and the perfect amount of wit and wisdom. 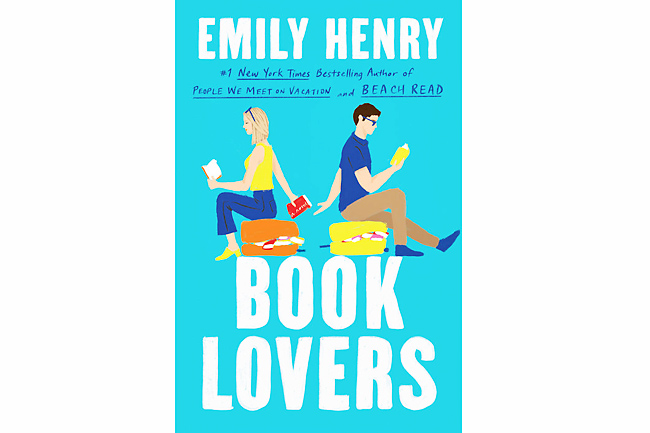 FROM HOLLYWOOD WITH LOVE BY SCOTT MESLOW

We can’t all live in a rom-com, but we can at least appreciate the masters of the genre. Meslow offers a worthy homage to them in this deep-dive that spans 30 years of hits, from When Harry Met Sally to Crazy Rich Asians.

The book is sprinkled with fun trivia, photos and interviews with directors and stars. You’ll be Waiting to Exhale until you finish it.

Nora is a workaholic literary agent. Charlie is the brooding book editor who works just as much as she does. After a combative first meeting, the two New Yorkers bump into each other in a small North Carolina town years later, when they’d both rather be anywhere else.

Despite their sizzling chemistry, Nora and Charlie do their best to resist the happily ever after that readers will root for from page one. Henry’s signature witty banter sets Book Lovers apart in the current crop of rom-coms.

Holmes is back with Flying Solo about a single woman on the cusp of her 40th birthday who returns to Maine to clean out her great aunt’s home.

While there, she finds a mysterious wooden duck that leads her on – well, a wild-goose chase, which detours to an old love.

The novel is a refreshing reminder that there’s no one-size-fits-all mold for a relationship, and that fulfillment can be achieved many ways.

ONE ITALIAN SUMMER BY REBECCA SERLE

Katy is unmoored when her mom, Carol, dies – so she heads to Italy on the vacation they had been planning to take together. Once there, she encounters a 30-year-old incarnation of her mother, and the two embark on a magical romp that helps Katy understand who Carol was as a young woman, before her identity became “mom”.

Serle’s novel is a touching mother-daughter story that speaks to the transcendence of parental love.

LET’S NOT DO THAT AGAIN BY GRANT GINDER

If you long for the days of Veep, look for the same dysfunctional family dynamics and political misadventures in Ginder’s latest novel.

That’s not good for the ol’ campaign, so Nancy and her son head to France to bring Greta home.

Ginder – whose previous novels include The People We Hate at the Wedding – delivers a delicious satire that’s excellent escapism.

In Hartnett’s new novel, protagonist Emma returns home to New Hampshire to care for her dad, who has a degenerative brain disease. He’s hallucinating animals and also reports seeing the ghost of Ernest, a naturalist who has been dead for many years.

There’s a lot happening in Unlikely Animals, including Emma and her dad’s efforts to find an old friend struggling with addiction.

It’s a quirky, poignant novel about family, community and love for our animal friends.

THE WISE WOMEN BY GINA SORELL

Wendy was a longtime successful advice columnist – though you wouldn’t know it based off her two daughters’ disorganised lives.

They’re riddled with problems, some of which might be her fault, so she flees her Florida retirement village and shows up in New York to save the day.

As the women aim to solve their dilemmas, it becomes apparent that Wendy has plenty of her own. The Wise Women is cheerful and full of heart.

THE MAID BY NITA PROSE

Here’s a cozy mystery to take along on vacation: It’s about Molly, a socially challenged housekeeper at a fancy hotel who finds a wealthy guest dead in the penthouse. Once the police decide she’s suspect number one – an easy case to make, based on her slightly odd mannerisms – her organised life is thrown into chaos.

Fortunately, an unexpected and quirky cast of friends turns up to help prove her innocence.

The Maid is a lighthearted mystery that shines as Molly evolves and learns to connect. It’s being adapted into a movie starring Florence Pugh.