The total new cases included 64 local infections, 30 Myanmar migrant workers in Samut Sakhon, a province near Bangkok where a cluster of cases was discovered last week, and 16 imported cases, according to Taweesin Visanuyothin, spokesperson of the Centre for the COVID-19 Situation Administration (CCSA).

The CCSA has announced plans to prohibit massive gathering and organising of crowded events for any purposes throughout the country, Taweesin said.

The discovery of the new outbreak, which has put the coastal province of Samut Sakhon under a 14-day lockdown, weighed on Thailand’s economic recovery and exacerbated the government’s efforts to aid the ailing tourism sector.

To contain the spread of the disease, Thailand imposed restrictive measures by province according to risk levels and caseloads, with its 77 provinces classified into four categories, namely the highly controlled, controlled, under-high-surveillance and under-surveillance. 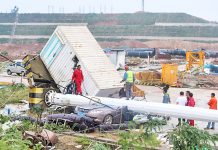